The question of ‘fear and being in fear’ has always intrigued me, especially as a child. As an adult it bothers me more, nags at me that my society seems to like fear.

Not only fear but addiction to voyeurism of violence and the criminal nature.

For example the popularity TV shows like CSI and Criminal Minds or Dexter.

I find it odd we are horrified yet entertained by this type or ‘frequency’ of experience.

To be honest as a child I did too.

I wanted to see the scariest movies and writhe. I craved to ride the scariest rides at the fair and scream. I would cut the heads of grasshoppers just to see their bodies jump around. I even hid under my sister’s bed to intentionally scare her.

Greg Braden’s http://www.greggbraden.com/ work teaches us that fear is a wide wavelength that hits very few places on your DNA as it vibrates through you. Where as LOVE is a tighter wave, a higher frequency and so hits more DNA triggering more response, greater consciousness.

My experience of church teachings was about LOVE. However the FEAR of my ‘creator GOD’ was also taught to me in many Sunday School stories. For example a quote that sticks with me goes:

“Thou shalt have no other Gods before me for I am a jealous God.”

The true God is perfect and ‘coveting’ is against the 10 Commandments, so this statement did not come from the true God. I’m sure this was the start of my skeptical approach to certain social mores.

My basic philosophy is kindness. This chart below  sums it up.

I suggest we dance a duality between LOVE and FEAR.

The concept of Hell was ‘crazy scary’ for me as a young Baptist child.

The absolute duality of Heaven or Hell frightened me very much.

Eventually I went to Catholic school and upon learning about Purgatory I felt a bit better. The idea of having such a short life here on Earth compared to an eternity afterwards in only one of three places was so weird.

I learned life was very a anxiety ridden business.

I’m going to share a story from ancient Khemit.

This story is about how I suggest fear was born into our consciousness.

I think we maybe descendants of survivors of an ancient global cataclysm.

This event possibly ended a technologically advanced thriving sea going, air going, advanced global civilization. This event may have occurred around 13,000 years ago. Making we present day humans of Earth akin to a legacy of post-traumatic stress disorder survivors.

Right well that explains a lot, you say.

I suggest our human history is much longer and more complicated than we imagine.

In 1994 Dr. Robert Schoch (http://www.robertschoch.com/) re-dated the Sphinx at Giza (Khemitian name is Tuf-Nut or ‘Spit of Nut’ is associated with water) to a much earlier time. Dr. Schoch suggests due to the rainfall erosion on the harder layers of the sandstone she is constructed of, her age must be 6000-9000 years old.

See the erosion pattern here around the enclosure. Wind erosion is seen horizontally into the harder and softer layers of sandstone, whereas water erosion is seen vertically in cut channels. 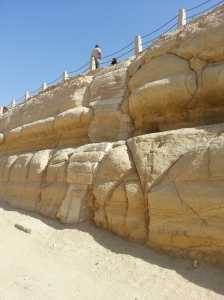 He was strongly criticized and asked rudely where the ‘pot shards’ or physical proof from this magnificent civilizations time were? Recently Dr. Schoch was vindicated when ruins uncovered in Turkey near Gobekli Tepe (http://www.gobeklitepe.info/) were discovered.

This amazing site is constructed of stone circles and monoliths and was purposely buried and abandoned 12,000 years ago. It’s being painstaking uncovered and some artwork is reminiscent of the hands of the recently uncovered Maori bodies at Easter Island seen below.

Many ancient sites reveal evidence for a global cataclysm about 13,000 years ago.

I am interested in the advanced global civilization that existed before this trauma.

The ruins of Puma Punku in Bolivia are buried beneath layers of mud from Lake Titicaca now miles away.

This site reveals a massive cataclysm a long time ago.

The archeoastronomy of this area at Tiahuanaco dates it to well over 10,000 years old. 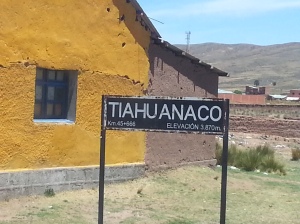 Notice the shape of the ‘H’ on the side of the belt in ruins at Gobekli Tepe and the ‘H’ blocks of Puma Punku. 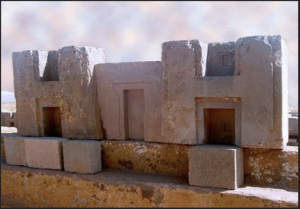 Not that they are connected, as I feel the H blocks slid into each other as you can see their rear view I shot here, but it is neat.

More proof lies in the excellent book ‘Land of Osiris’ by Stephen Mehler http://www.gizapyramid.com/BIO-Mehler.htm In 2013 I toured Egypt (Khemit) with Stephen and Hakim’s son Yousef. He describes a very wet ancient land in northern Africa. There is an argument for a global civilization that may have been centered on the ancient land referred to as the Band of Peace or Bu Wizzer. Reminds me of ‘Wizard of OZ’

According to KMT oral tradition this area is where we humans originate. The people were 42 tribes. The 42 tribes of people were called The SESH. At the Kom Ombo temple along the Nile, there is a depiction of the 42 tribes.

Coincidently Kom Ombo is the temple where one could face one’s fears.

It is the reptile or crocodile temple. 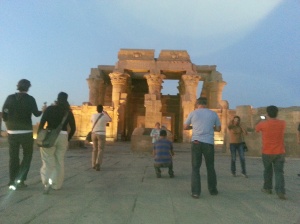 One would place their head inside the niche pictured here, then turn and climb into a underground passageway filled with water and crocodiles.

Looking at the small grate covering the entrance to the underwater passage. I am glad not be asked to do it this lifetime.

If one emerged from the other side it was said one had conquered their fears.

Little did the initiate know that the crocs were usually well fed so chances were on thier side. This conquering fear which created solely in the mind is wonderfully powerful stuff.

The loss of the advanced culture in operation at that time caused havoc and a priest class developed to soothe the trauma. In this form the concept of ‘religion’ developed. The cataclysm that ended the last great global civilization was part of the natural cycles we live through over and over.

The book ‘From Light into Darkness’ by Stephen Mehler is a must read for those who wish to pursue this information. He studied for 16 years with Khemitian oral tradition keeper Hakim Awyan.

The civilization of Khemit also known as KMT, The Black Land, Bu Wizzer, The Band of Peace and Het-Ka-Ptah (EGYPT), is thousands of years old.

By its time keeping records also known as the 5 Sun cycle, Hakim’s information allows him to suggest a date of 52,000-62,000 years as the age of the Sphinx. This date matches the cycles of Golden and Dark Ages and tells us she comes from 2 Golden Ages ago, not just one.

In my previous article I described the 5 Sun cycle as a natural evolution of consciousness we move through regularly.

In this time we are moving from the 5th Sun called AMEN, the hidden or the time of darkness when Mother Nut has swallowed the sun, into the rebirth of the 1st Sun or KHEPHER.

He is represented by the scarab beetle pushing the sun up over the horizon as a new cycle or AWAKENING is started. I 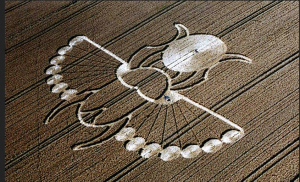 The beetle Khepher pushes the SUN so it RISES on the HORIZON.

Notice the word HORIZON can be thought of as composed of the terms HORI and ZION. Representing the HORI (HorUS) ‘son/sun’, and the promise of ZION, our mutual idealized, harmonious community or utopia.

The ‘promise’ being we always follow this natural cycle of consciousness evolution.

Just as the sun rises, as it is reborn each day, we will always be reborn into a newly evolved consciousness at the end of each time of darkness or gestation.

There is no blame only evolution.

EVOL U TI ON spelt back wards is NO IT U LOVE. No love = No evolution.

So never fear. It’s only an illusion, a trick of your mind. The reptiles are well fed already.

Just relax and enjoy your natural ebb and flow as you ride of the spirals of time.

Generation of joy comes naturally to us all when we see ourselves living lives of FEARLESS eternal consciousness evolution.