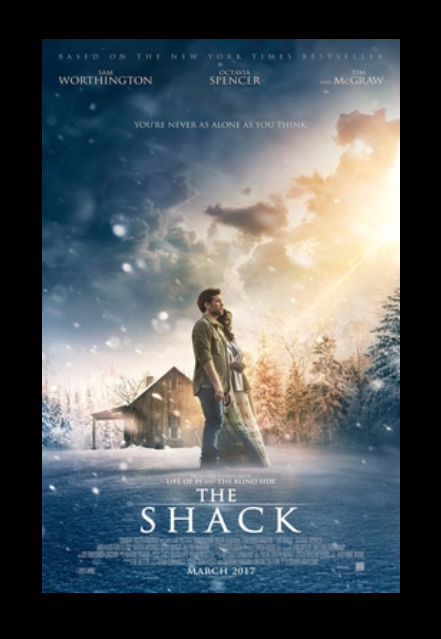 I recently was asked to watch a movie.

This movie is based on a book that apparently had become quite contentious in a certain Baptist community. So much so that the book was removed from the Church library.  In fact the person who asked me to watch this movie had put the book down before finishing it calling it ‘weird’. Thankfully this person still was curious enough about the story to ask me to watch it with them.

Well Holy Hannah Banana. The movie The Shack is fabulous. This is the best movie of it’s kind I have ever seen. In fact I can plainly say there is no movie quite like this one.

I so wish they would make more stories like this.

“The Shack “is a metaphor found inside each of us.

It is the place you get stuck, where you get hurt, or damaged. Our Shacks are where  self created shame or hurt is centered.

The novel is set in the American Northwest. The main character is Mackenzie Allen Phillips, a father of five, called “Mack” by his family and friends. Four years prior to the main events of the story, Mack takes three of his children on a camping trip to Wallowa Lake near Joseph, Oregon, stopping at Multnomah Falls on the way.

Here at the falls Mac shares a legend with his youngest daughter Missy. This story of an India Princess, daughter of a great Chief, who chooses to sacrifice her life by jumping off the waterfall to save her tribe from illness. This story, told to the young girl, becomes the fabric of her spiritual understanding.

In the movie there is a horrible scene where Missy goes missing.

Two of his children are playing in a canoe when it flips and almost drowns Mack’s son. Mack is able to save his son by rushing to the water and freeing him from the canoe’s webbing, but unintentionally leaves his youngest daughter Missy alone at their campsite. After Mack returns, he sees that Missy is missing. The police are called, and the family discovers that Missy has been abducted and murdered by a serial killer known as the “Little Ladykiller”. The police find an abandoned shack in the woods where Missy was taken. Her bloodied clothing is found, but her body is not located. Mack’s life sinks into what he calls “The Great Sadness”.

That winter Mack receives a note in his mailbox from “Papa”, saying that he would like to meet with Mack that coming weekend at the shack. Mack is puzzled by the note—he has had no relationship with his abusive father as he left home at age 13. Since there are no footprints in the snow up to the mailbox, Mac suspects that the note may be from God whom his wife and Missy referred to as “Papa”.

After contemplating it, he leaves his home to go to The Shack for the first time since Missy’s abduction and has an encounter that will change his life forever.

Director Stuart Hazeldine  has created a masterpiece of storytelling in The Shack. During Macs experience he meets the Holy Trinity. Father, Son and Holy Spirit. We soon recall the Father was introduced in the beginning of the film as a black lady neighbor sharing baking and caring for Mac. The Son is a middle Eastern carpenter who carries firewood and the Holy Spirit a beautiful Asian woman who tends a fabulous garden. When Mac arrives The Father is baking bread in the kitchen. Bread of Life.

The beauty I found in this story is how we all have a very unique and personal relationship with the Divine. The problem with Churches and often even religions themselves is that they want to strictly define the trinity and create dogma. Spirituality is our human birthright. The love of God is given to us. We are all children of the Father by the fact of our being.

The races of the actors in the film pay homage to the four colours of the Medicine Wheel of Native Spirituality.

In the movie there is a fabulous scene where Mac is in a rowboat that starts to leak. Black ugly waters start to pull him down. This is his pain. From his own abusive childhood to the pain of losing his daughter. The Son walks on the water out to him and offers his hand. “Look at me Mac Look at me.” the Son pleads when Mac can only see the black waters rising. He chooses to look at the Son and take his outstretched hand.

You know what comes next. Running on water !! Mastering emotions.

The Holy Spirit shows him how to manage and tend the garden. They prepare a hole by cutting out a beautiful plant. She mentions that a poison root if blended with a certain blossom will bring healing. The Son is building something in his shop but we don’t find out what it is till a bit later.

The Son takes Mac to a path only he can walk. He goes inside a mountain to meet Wisdom. Now we are in the space behind the waterfall and Mac learns a lot. After being asked to play God and send one of his children to Hell he realizes he cannot.  Once he has wisdom he looks through the waterfall and sees his daughter safe. Her concept of death was the Indian Princess going beyond the waterfall and so here she is playing and having a great time.

Mac meets the Father again however he is now an Indian man. Papa. The Indian Chief and Missy’s concept of a Father who must be obeyed. This Father guides Mac to the secret spot where his daughters body is hidden. Once the body is wrapped and taken back we see The Son has built a beautiful coffin and the space in the garden will be her resting spot.

There is much more to the story but I don’t want to give it all away.

To love God is to love self and others. Trusting the love is hard part.

Keep your eyes on the Lord, not on your pain.

I hope that Church puts the book back in its library with a copy of this movie too !