In my previous blog I mentioned the Unfinished Obelisk and the curious ancient marks in the red granite at Aswan Quarry.

The red stone transported to many places became amazing artifacts in Egypt, some many hundreds of miles from the quarry. Let’s look at three of these places.

First we see this stone at The Ramasseum.

This site has an amazing toppled granite statue. The red granite stone is from Aswan quarry hundreds of miles to the south.

I was so astounded I took less photos than I should have. See unused pink camera.

Below is Canadian Geologist Suzan Moore regarding the head of the giant 2014. Yes we did discuss wardrobe before she left. Though she missed the scarf memo.

How were these perfect ridges created on the toppled red granite statue ?

Below we see the toppled granite giant. See the wall behind?

It is bowed in. Perhaps an ancient ‘explosion’ between the two, toppled the statue and pressed that wall in ? Egyptologist and expert KSAM guide Mohammed Ibrahim pointed this curious fact out.

Second we see another ancient site built from Aswan quartzite.

The Colosi of Memnon. The guy on the left is made from one solid piece.

Third and best, the granite boxes underground at Saqqara. The Serapeum, one of the most extraordinarily mysterious creations of the ancient world.

I noticed this sign and finally took a picture of it once I was back on the bus. Guards are STRICTLY forbidden to give any information. So interesting that one is discouraged from asking questions. Never mind asking where the washroom is I guess 🙂

These large knobs are seen frequently on stone structures in Peru and Bolivia.

On this tour we saw them in Egypt too. To the delight of Brien Forester who was visiting for the first time with us.

Below are the knobbies on the 3rd pyramid we saw the first day of our tour. 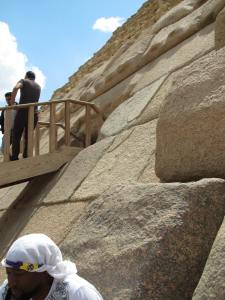 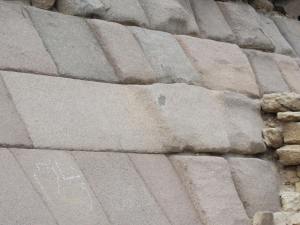 Back at the Serapeum we find our selves in a surreal underground environment. Recently opened to the public, we are privileged to be one of the first groups to visit. It has that nice woody Home Depot new flooring smell.

The official story of the place is for the tomb of the Apis Bulls of Ancient Egypt. In fact the host/guard of the site was quite emphatic to show me a small marking on one of the large granite boxes depicting a bull.

His desire in pointing so vehemently to this mark, I suppose, was to satisfy any potential curiosity about what I was going to behold. NOT. Besides I thought he was strictly forbidden to give me any information. I guess his style was more of a ‘This is what it is and no questions’ type 🙂

I said thank you.

Stephen told us this mark was “Added much later by “dynastic” peoples who believed boxes were for bulls.” The inscription is saying: “Wizzer-Apis”=”Osiris-Apis” which becomes “Serapis” in Greek–the origin of term “Serapeum”. No where does it say that bulls were buried here.

Touring with KSAM one is constantly reminded to look through time. Historical time is displayed to us all at once at an ancient site. The transformation of the site through time must be considered.

Ones who build sites originally may abandoned them. Others rediscover and reuse/reinterpret the sites again and yet again through history.

We must use logical discernment to sort through the layers of times physical evidence. Then the unbiased truth of each site is revealed. Realizing the marks on the boxes were not put there by the creators of the boxes, was a key bit of knowledge. Most frustratingly the most ancient things in Egypt sport no original markings.

Yousef also showed us ‘remnant under the lid evidence’ of what seemed to look like dried liquid. Perhaps a forgotten process may have been used to polish the boxes when they were placed. That curiosity is currently under investigation by KSAM.

The walls near the entrance were filled with small niches cut out for some past purpose. I am guessing that a later people carved the niches for adoration/ritual purposes.

Maybe ancient people upon rediscovering this site sold tour plaques saying “I was here. Blessed by Bulls”. Then if you liked, placed a plaque for 10 of some currency so others would know of your devotion to the Bulls! Just a guess. 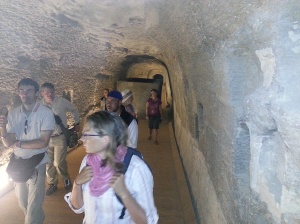 Another amazing thing you notice is the construction of the perfectly formed arches cut into the bedrock. Yousef asks us ‘What source of light did they use?  No soot from oxygen sucking torches was evident. How could they breath?”

What is this place?

An amazing underground tunnel system, reminding me of a subway station. The perfection of the curve in the original walls is confounding. How could such perfection be achieved in the dark one story underground ?

Even the indents in the boxes are polished. Interestingly can you see an empty cartouche oval scratched into a box. Obviously etched in much later than the box was put here. Just waiting for someone to buy the space on this rediscovered marvel. ‘YOUR NAME HERE’

These inferior scratches were so obviously created by others, much later than the people who actually constructed the magnificent box. The scratched in line across the top wasn’t even straight.

Who constructed these granite boxes and how did they move them far underground perfectly centered into niches staggered along a hallway ?

Engineer and ancient Egyptian researcher Christopher Dunn visited the Serapeum with us in 2013 and also in years previously. These are the famous photos of Chris showing the precise construction inside a black granite box.

Chris is authour of The Giza Power Plant and more recently, The Lost Technologies of Ancient Egypt, He once questioned a company in the business to create a granite box like this. If money were no object, he asked, could they do it for him? Answer: Out of one piece ? No. They would have to glue the box together. The internal 90 degree cut outs are not doable.

So officially we are taught the ancient people created, BY HAND, the entire complex of the Serapeum, then by copper hand tool again, these beautiful stone boxes out of some of the hardest stone available. (See MOHS scale for impossibility) Then dragged these multi-ton boxes down underground and centred them in offset carved out niches and finally polished them with perfection ?

Can copper cut granite to this perfection ? 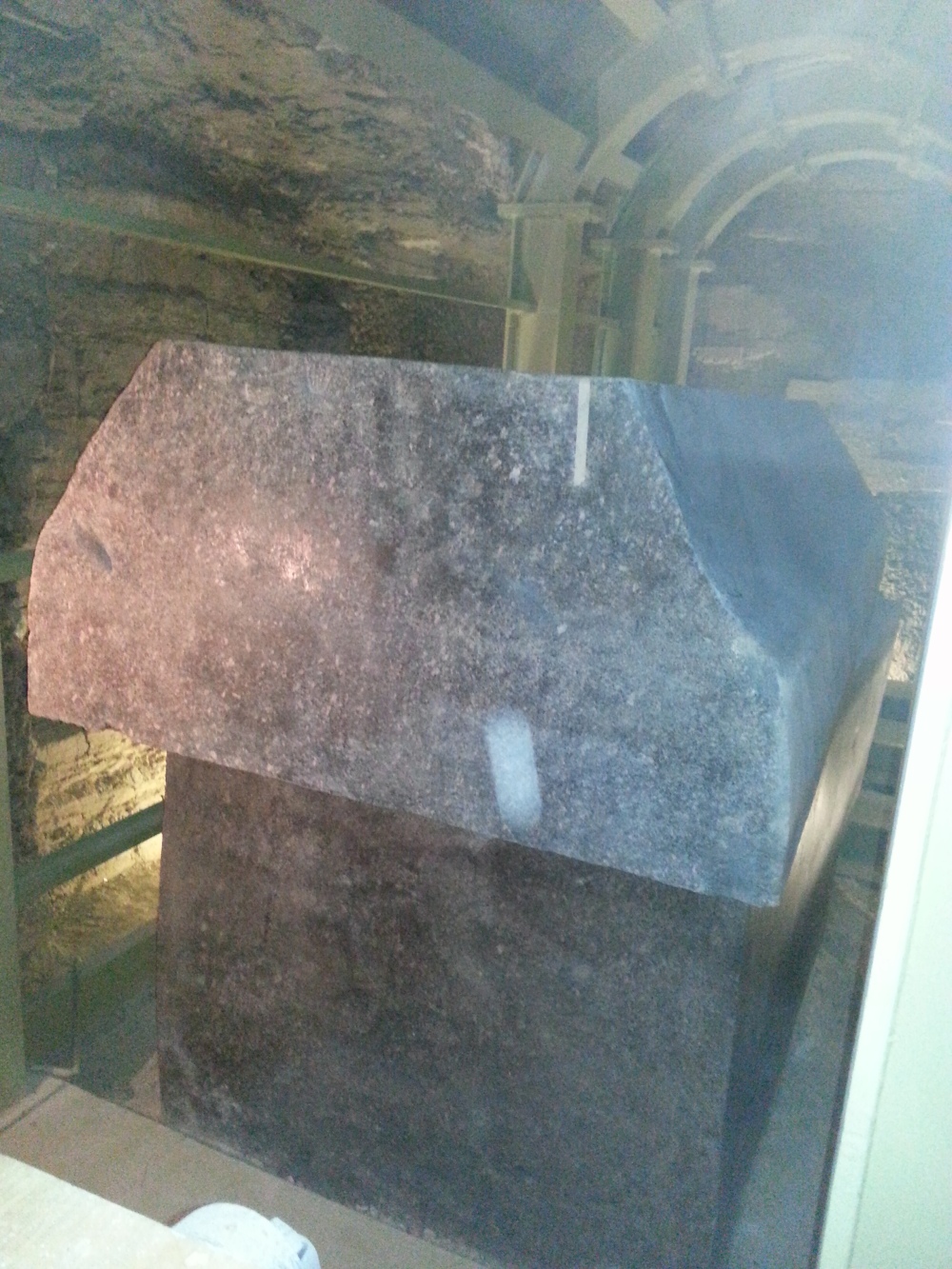 Were these boxes storing large quantities of power for the Giza Power plant Chris Dunn writes of ? A free energy enjoyed by the advanced ancient cultures ?

Behind the locked door we see the original dirt floor.

Also an original niche without a box.

Touring to Egypt was one of the most powerful experiences of my life. Please consider a trip to Egypt. KSAM is the best loved locally, safest and most interesting company you can hope to learn with.

Enjoy this video with Yousef Awyan at The Serapeum.