The mysterious Gosford Glyphs are found in eastern Australia. They are Egyptian script carved in a narrow space onto two large sandstone faces. However when did Egyptians sail to Australia? The implications are history changing.

Known to the west since about the early 1900’s reported officially in the 70’s, though the indigenous locals had knowledge of them for eons, the Gosford Gyphs were relegated to the ‘hoax’ pile. See info from Wikipedia below:

The Gosford glyphs are a group of approximately 300 alleged Egyptian hieroglyphs in an area known for its Aboriginal petroglyphs. They are carved into two parallel sandstone walls about 15 m (49 ft) long. They depict boats, chickens, dogs, owls, stick men, a dog’s bone as well as two that appear to be the names of kings, one of them Khufu, the other uncertain. These names are given the same personal name and throne name. There is also a carving of the ancient Egyptian god Anubis.[3] These were first reported in 1975 by Alan Dash, a local surveyor who had been visiting the area for seven years. Dash continued to visit for five years and reported that the number of hieroglyphs had increased every time that he visited.[3] Since then the hieroglyphs have been claimed by amateur Egyptologists to be authentic script carved by ancient Egyptians about 4,500 years ago.[4]

Australian Professor of Egyptology Naguib Kanawati has stated that they are not authentic,[5] stating that the hieroglyphs within the same panels were of widely different periods and some were carved backwards.[6]

Geologists have stated that the sandstone in which the hieroglyphs are carved erodes quickly and nearby 250-year-old Aborigine petroglyphs show considerably more erosion.[6] In 1983, David Lamber, then a rock art conservator for the National Park Wildlife Service, found some clean cut hieroglyphs which he estimated to be less than twelve months old.[3]

Subsequent to all of the above, and by 2013, the area surrounding the glyphs cleft has been declared an Aboriginal Place by the NSW Government; and a very extensive supposed “star map”, with over 3,000 points on it, has been mapped and internet-published by the “Forgotten Origin” team of amateur investigators headed by Steven and Evan Strong ( http://forgottenorigin.com ).

Relegated to the hoax pile? Nope. Not this week when The Khemit School of Ancient Mysticim made public their report on them.

School leader Patricia Awyan, along with her photographer Beatrice Awyan, traveled to see the glyphs in person to document them for review. Once back in Egypt Patricia’s husband Yousef Awyan, stone mason and Oral Tradition Keeper of Ancient Khemit, aided by Khemit School Egyptologist Mohammed Ibrahim, set to work. Taking on points previously used to claim hoax, the work done by these two sterling scholars is refreshing to watch.

The findings are astounding. Not only does the school vouch for the authenticity of the Gosford Glyphs but even translated the story to explain why the glyphs were made in this location. 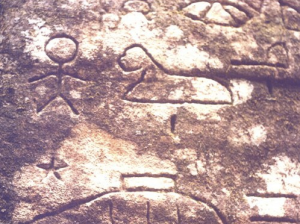 The hard work, dedication and honesty Yousef and Mohammed display in their presentation speaks for itself. I toured Egypt with The Khemit School meeting both men and Patrica in 2013. I can personally vouch for their complete integrity. Today we can say finally the right mix of education, experience and wisdom took a look at the glyphs for what they are. An authentic tale of a tragedy, left by stranded sea faring Egyptians far from home.

The historical implications are awesome. It seems our ancestors had a thriving global sea faring community ! Perhaps the past is not as we are taught. The fascinating Map of the World revealed in the third video is validation of that fact in my eyes.

So without further blah blah from me please sit back and enjoy the proof. See original KSAM blog here.