I recently watched a Gaiam TV program  featuring Mr. H. Dean Brown, translator of The Upanishads and the Yoga Sutras. He was in a discussion with Jeffrey Mishlove about the origin of languages in the world.

All languages probably stem from one mother language that evolved into many of the Eastern and Western countries. Indo-Euopean words are rooted in the same ancient source.

One of these languages is Sanskrit.  A very special sacred language used for human ritual and spiritual practices. An exacting, specific language, giving a great deal of precision to consciousness and spirituality. Practical.

While listening I perked up my ears when Dan started to sound like Hakim Awyan, Oral Tradition keeper of ancient Khemit. Pre-dynastic Egypt.

My mind quickly rushed back to 2013 and my Egyptian Tour Guide Patricia Awyan.

We were in the Cairo Museum, upstairs near to Tut Exhibit. I wandered over to a small case near the stairs. I noticed cylinder seals. They were very Sumerian like and also some reminiscent of Easter Island Rongo Rongo script. I was flummoxed and pulled Patricia over. She smiled slyly, looked at me with a twinkle and replied,

“We are all from Khemit, Beata”.

The roots of who we are certainly lay in ancient Khemit.This Band of Peace or Buwizzer as it was referred to, stretched further than I had originally thought.

Dan Brown surprises me again when he starts to speak of human senses. The message I learned from my Egyptian tour with Stephen Mehler, who studied with Hakim, was about Nature and our Divine Human Nature. Our senses are how we interact with reality. The sacred experience of being alive.

This is exactly what we learned in Egypt. The god and goddesses were in truth aspects of human consciousness. We have 360 senses. I wrote a blog on it here.

In fact the Sanskrit word OHM is where we get the word HUMAN from. Ohhmmm Man. The ATMAN. Ātman (/ˈɑːtmən/; Sanskrit: आत्मन्, IAST: Ātman) is a Sanskrit word that means ‘inner-self’ or ‘soul‘

The ATMAN. Well what does the ATMAN do ?

Action is life and Inaction is death.

To act. To Experience.

From Wikipedia, the free encyclopedia-Prakṛti , also Prakṛiti or Prakṛuti (from Sanskrit language प्रकृति, prakṛti), means “nature”.[1] It is, according to Hinduism, the basic nature of intelligence by which the Universe exists and functions It is described in Bhagavad Gita as the “primal motive force”.
It is the essential constituent of the universe and is at the basis of all the activity of the creation.[2] The one god mentioned in the Vedas has two main parts, Prakrti and Purush, and all gods which Hindus worship are just an instance of the Purush while goddesses are instances of Prakrti (sometimes called Adi-Shakti).
The female is the practical one right ?
ANI SOPH seems familar to Adi-Shakti too 🙂

Theory and Practice are akin to Expectation and Experience.

So we come to realize that the term and experience of the ‘Divine’ means one uses the human senses. Your Natures. These are your Devas.

Your senses are divine.

Sense is a feeling created from emotion and thought.

Your conception of the universe, gives rise to your perception of it. So watch it. Keep an open mind. Through ALL of your senses you may comprehend GOD.

The Veda is a science, as it leads to precision. Yoga is a precise way to attune the mind. There are many types of yoga, all positive. All mental powers can be accessed and improved through yoga.

The reason to pursue yoga is that Consciousness is the ultimate fabric of the Universe. All unfolds from the mind. Your true control lies in your own feelings and thoughts.

The expectation of the quantum physicist affects his results 🙂

Attitude of the experimenter affects the results he will get.

These ancient Vedic human practices are totally empirical, meaning they work on a practical level. They are Manifestation Manuals on how to take action here and now.

Yoga sutra technology is used to achieve insights and integrate them into our personal life.  It is a ‘how to manual’.  The ancient Vedas tell us about the Universe and how to proceed here.

Silencing the mind is crucial in order to create a perfect reflection of reality.

All you sense is through your ‘centre’, so one must be there in order to feel it.

Malkuth or Malchut[pronunciation?] (“kingdom”; ملكوت ;מלכות), or Shekhinah, is the tenth of the sephirot in the Kabbalistic Tree of Life. It sits at the bottom of the Tree, below Yesod.

This Shekhinah sephirah has as a symbol the Bride which relates to the sphere of Tipheret, symbolized by the Bridegroom. Unlike the other nine sephirot, it is an attribute of God which does not emanate from God directly. Rather it emanates from God’s creation—when that creation reflects and evinces God’s glory from within itself.[1] 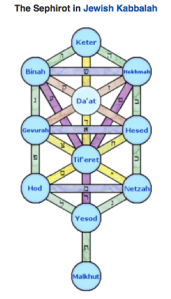 So now Nature, Human Sensuality and Spirituality come together.

God is found and met directly through  our ‘nature’.

Shamanic proto-Vedic people evolved into the Vedic science and theory by creating meaningful authentic natural experiences; creative expressions of the Divine from within themselves. These evolved into the rituals and practices of nomadic humans.

All human shamanic tradition is a common human culture based on experiences.

So any outer authority is not natural.

Put that in your pipe and smoke it 🙂