David Wicock’s series WISDOM TEACHINGS on GAIAM TV is a revelation. He recently gave a history on the spontaneous generation of life. This was and has been proven over and over in our labs.

It’s true. Organic matter breaks down into little blue bions and reforms into new life forms. Even in a sterile environment the bios form and reorganize into new life. The  blueprint is accessed with no problem and life goes on.

The distinct blue field around the living red blood cells above, was documented by Wilhelm Reich. His persecution by the FDA and thus society in the early to mid 1900’s, is yet another sad case of the suppression of natural science. Simple natural science is a threat to the big business of modern medicine. It is also a potential threat to the oil and gas companies and the electricity sellers.

Everything in nature expresses as a build up of charge, a climactic release and a relaxation. From a seed germinating in the earth, breaking through it’s shell and soil, to the act of human procreation, life follows this basic expression in it’s manifestation.

Pleasure, sensuality, creation, and nurturing love also concentrate life force. It seems this force or information field, is always available and all we need do is become aware of the natural way our bodies access that information.

When I studied ancient Khemit and traveled to Egypt, I noticed certain blue colour in some temples. We were told it was a special pigment called Khemitian blue. Another curious connection is the PTAH and his status as creator god and also a being from ‘out of the blue’.

Ptah, was revered as the god of all craftsmen as he crafted the universe and the other gods. His headdress was a ‘blue cap’ crown.

The “Lord of Truth”, the “Noble Djed”, the “First of the gods” and “He who set all the gods in their places and gave all things the breath of life”.

Ptah was aligned with the primordial ocean called Nun. (THE VOID the Source Field ?) His thinking and speech brought the cosmos into existence. So the world, rather than being created out of chaos, follows the preconceived plan of Ptah.

From Stephen Mehler’s research, I learned the blue pigment of ancient Khemit had barium in a form not found in nature. This Khemitian blue is spectacular and striking but also pale. Not unlike the life force we see around the blood cells above. Not unlike the thin blue layer around the Earth herself. Not unlike Mother Mary’s cape.

Mehler writes the pigment report contained a quote from the analysis stating : “Sample 4 is an enigma if this glaze originated in the Nile Valley. The high percentage of Barite (barium sulfate) has not been found as an Egyptian pigment in previous studies, and the presence of elemental barium raises some interesting questions, as it is not normally found in this state in nature.”

The suggestion is that these ancient people could handle molecules in a way we cannot fathom. An example of Alchemy from the original EL KHEMIT ?

The technological know how of the ancients, their understanding and practical utilization of life force, can also be seen atop a mountain in the ruined megalithic Gunung Padang temple, Indonesia. It makes sense to build a healing temple so high up away from any underground water interference.

I noticed that an item had been found here that was created by someone long ago as a healing tool.This is obviously a hand held Orgone generator. Concentrating the life force from out of the blue to heal the human body. 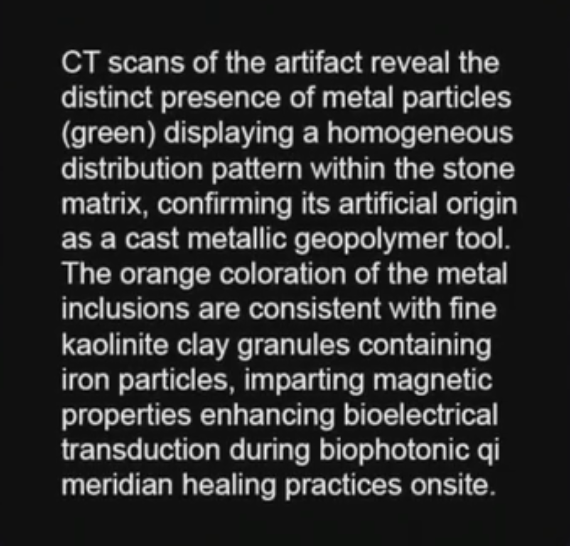 Sounds like the natural science Wilhelm Reich was on about !

His Orgone accumulator I thought.

It was basically a mixture of organic matter and metals. He used layer of cotton batten/Fiberglass and steel wool to line a box whose interior would become saturated with life force energy or as he termed it Orgone energy. Intensely healing and invigorating for living systems we can benefit today from this natural science.

This video shows the lay out and size of the amazing Gunung Padang megalithic site quite well.

So back to the blue.  I noticed this energy also being generated by sexual activity. I used to marvel at how it could be created and then felt to dissipate in the afterglow.

No wonder orgasm is healthy.

I think it is fitting to say our DNA taps this ‘blue’ source field for the BLUEPRINT to our perfect health. The communication must be kept clear. We need a remembering of our natural science such as Orgone tools to promote good communication with the PTAH. Then we receive the blessing of life force and radiant health from out of the blue 🙂