In September of 2017 I traveled to the mysterious city of Cusco Peru. My intention was to continue into the sacred Valley to the Ayahuasca retreat called The Source. See my blog here.

Before I would continue I had made arrangements for a private guide to take me to some of the megalithic sites in and around Cusco. Willko Apaza Pachamama Spirit, a local healer and Medicine guide, took me on the first day above the city to the megalithic wall and area around Saqsaywaman. 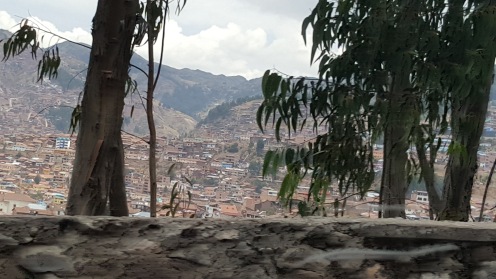 I had no idea how large this area was. I was still suffering from a bit of altitude sickness as we entered the park.

Willko walked me through many eroded areas and Temple sites I had no idea were there. We also saw many beautiful ancient Hi-Tech Rock cuts and nooks and crannies in the ancient eroded stones. He first took me to an area with seven Cuts representing the seven chakras. The flattened areas were obviously Hi-Tech and it culminated in a Condors beak under which one would stand to allow water to trickle on to the Head. 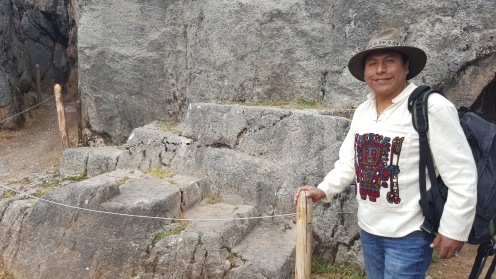 He allowed me a moment to stand in that spot. I was compelled to remove my shoes and allow the energy to race through my body. There was a small rope around the seven platforms so I didn’t feel okay walking upon them but I did feel the rush of energy standing under the Condors beak.

Next we wandered through an area that was very eroded. There were many labyrinth like areas that were riddled with cuts and nooks and crannies. I am happy Willko was with me because I would have had no idea what I was seeing.Then we reached a special entrance. Here he asked me to stand in front of a stone looking like a hand. It had two peaks pointing outward. Like a thumb and fingers as you see in the first photo below. The ‘thumb’ point lined up with my third eye at my forehead and the ‘finger’ point touched my sternum where my heart chakra is.

Stone that touches your forhead and heart Chakra

After a moment standing like this he asked me to turn and then blew some sacred oil onto my head and body. Then he asked me to turn and enter into a small dark cave. I was a little bit nervous. He asked me to bend down and keep my head down as I walked through the corridor. Because I still had the altitude headache I really didn’t want to but I force myself to take this dark journey.

I put my hand along the side of the wall and I could feel the rough wall give away to a smooth line where many before me had obviously placed their hands marked with sacred oil. Suddenly I became very reticent and I felt like a stubborn mule who didn’t want to go forward. I was very close to saying “No way! I’m not doing this!”, but then I thought how would I make it through the upcoming four Ayahuasca ceremonies if I couldn’t walk through a simple corridor in the rock no matter how dark it was.

.To make myself feel better I asked Willko to touch my back as I continued on my way. I kept my eyes closed and just kept moving forward with my head down I didn’t want to imagine what was above my head. Eventually I decided to open my eyes and look forward. To my delight I could see the cave opening and light pouring in a short distance ahead. Upon seeing this beautiful site I was filled with pride and happiness at my accomplishment.

Once we emerged he took me to a small resting spot outside the exit. He then turned to me and said, “You are now Reborn”. We had gone through the birth canal, the womb of Pachamama. I was so relieved and happy. I was crying and crying before I even realized what was happening. Tears of joy streamed down my face and I felt very refreshed and nearly forgot about my altitude headache. I am glad he did not tell me what we were doing until it was over because I may never have done it ! Willko is a great guide.

We then continued past many beautiful Hi-Tech Rock cuts.

Then arriving into a large round area that he described as a calendar. He said there were many quartz crystals under the ground here and then it was a very ancient place. He also pointed to many rocks that looked like various animals. I wondered to myself if they actually turned into these animals at special occasions and moved around. It was a bit reminiscent of the stones at Avebury in England as there are stories of these Stones moving as well.

The wind was picking up but we decided to sit and look towards the zig zag wall that I had wanted to see for many years. I had only used Google Earth but now there it was right in front of us.

I decided to put my jacket back on as we walked towards this megalithic Wonder. I could see rain clouds all around but it hadn’t started to rain yet. Willko then showed me the various temples associated with different Stone areas. Also a 7 segment snake carved into the Rock that again was associated with the chakra system.

It’s very hard to explain the construction of these walls. I was amazed how beautiful curvy squishy and loving the stones felt. Wilko explained that the ancient technology used to create this wall was something we had no idea about in our day. I laid into one of the corners it felt like I was being hugged.

The stones seemed to emit a wonderful caressing energy that welcome you and loved you back. I think the technology used had to be something that connected with the consciousness of the Stone. Perhaps this technology asked the stones to bend and shape themselves and they complied. It’s a much different way than forcing with hard tools scrapers and saws. I really have no idea of course how they did it but I did not expect the loving energy I felt radiating from these wonderfully pillow like stones.

Wilko also pointed out the Triangular stones and told me they were the female stones. The polygonal construction allowed for anti-seismic strength and the wall had stood for many thousands of years if not millennia. It was spectacular to slowly walk along this giant zig zag wall.

It has three levels but we only walked along the middle level.

My headache had returned and the wind was picking up. Though I didn’t want to leave I knew that my energy was dissipating so we decided to drive back into Cusco and visit the Corricancha. The adventure continues in the next blog post.