For my 50th birthday I indulged in an ‘add on’ tour with Hidden Inca Tours. This is the tour company you want to travel with in order to learn the secrets of Peru/Bolivia.

I joined a group at the end of a longer tour of Peru. We visited some unique sights around Lake Titicaca before entering into to Copacabana, Bolivia. From Copacabana we visited the Island of the Sun and Moon and continued to the mega city La Paz, then the controversial ancient sites of Puma Punku and Tiahuanaco. (This blog will not go into those mysterious sites as they deserved a blog of their own 🙂

To do this I flew to Lima Peru and stayed over night.

Then I flew to Juliaca high in the Andes and was taxied to a beautiful hotel in Puno right on Lake Titicaca.

I arrived at Aeropuerto Internacional Inca Manco Cápac, an airport situated in the city of Juliaca, thirty minutes from the city of Puno at Lake Titicaca .

The taxi driver’s translator was asking about my name. She said that is a like a kind of Saint right ? I laughed. Yes, yes.

For years people who were of Latino decent always commented on my name. One day I found out why.

BEATA is a Spanish term actually. In Barbara Walker’s book The Women’s Encyclopedia of Myths and Secrets, my name is defined as a Holy Woman or white witch. A woman closely affiliated with the church but not a nun. A hermit known for her potions and cures. If she was popular she was canonized when the church arrived, if not killed.

It also means ‘blessed’ in Latin. Hence ‘Beatitudes’ in the bible, or The Sermon on the Mound. (‘Blessed are the…for they shall….) If one uses a translator online it defines my name as: ‘God-fearing woman; goody-goody, woman who behaves in an exaggeratedly good manner to please others-blessed; pious; sanctimonious blessedness, happiness, felicity; pious person” Hence our conversation.

I had a day to adjust to altitude, then met the group. Great hotel. I was glad to have time alone to sit and enjoy the peace of this area. 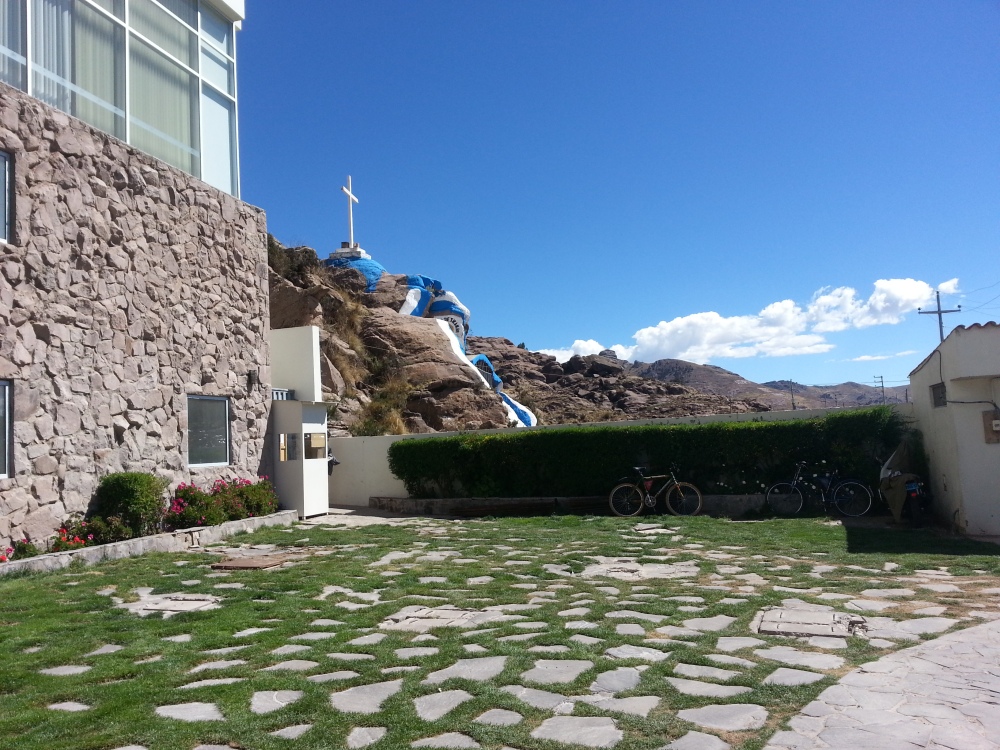 Grotto shrine next to hotel.

The next day we stopped at some very curious spots near Lake Titicaca.

First stop the Mushroom Fertility temple. INKA UYU is located next to a church. It’s outer walls are quite ancient, showing typical polygonal constructions. Interior walls seem more crude. Two little mushrooms or as I prefer ‘domes on sticks’ greeted us as we entered.

See my blog Nature’s Life Giving Proportions for more on the way these little bio-geometrical domes pump out life force. No wonder this is known fertility spot 🙂

Next stop the Devils doorway. Amaru Muru. The Star Gate of Peru or what I felt it was, a vortex. 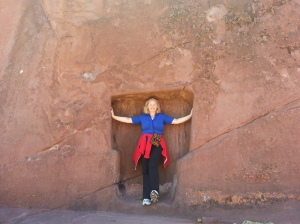 TFHL gets her Star Gate on at Amaru Muru Peru.
It is a sacred site that is not necessarily linked to any one culture. It is said to be a access point through which divine energies can flow. Local legend say it is a portal. Men of renown it is said, have come and gone through it. Coming back to check on things occasionally. Legend says Aramu Maru, priest of the temple of the seven rays, fled from his temple with a sacred golden disk known as “The key of the gods of the seven rays“, and hid in the mountains of Hayu Marca. He came upon the doorway as it was being watched by shaman priests. He showed them the key of the gods and a ritual was performed. A magical energy initiated by the golden disk opened the portal. The priest Aramu Maru gave the golden disk to the priests then passed through this portal “never to be seen again”. They say the disc ended up being tossed into the lake to keep it from the Spanish. Fun to think it could still be down there. Many people have reported phenomena when standing at various points in the doorway, such as visions, realizations, contact with higher beings, spontaneous healing and anything in between.

I could most certainly feel a vortex flowing off to left and forward of the doorway as you look at it.

I noticed that over to right there were some nice scoop marks. People were using them to sit in. This is soft rock however they reminded me of the scoop marks in the granite I saw at Aswan Egypt earlier that year. Also marks in Longyou Caves in China I wrote about last week .

We continued on to the border into Bolivia. Here Americans pay $150 to enter. Canadians like TFHL get in free 🙂 Though I was born in USA today my Canadian citizenship worked for me this day.

The beautiful Hotel Rosario was a welcome stop after this magical day.

That evening I had a wonderful meal of fish from the lake It was prepared fresh, gluten free and with love. By the way, Bolivian wine is awesome, Try it. Next day we loaded up the hydrofoil and set out onto the lake.

http://www.facebook.com/photo.php?v=10152549214511419&set=vb.587146418&type=2&theater&notif_t=video_processed During the crossing to the island we engaged in a blessing ritual. Since we were crossing into Inca Gods territory we swore to be moral. Not to lie or steal or cheat. Then we were sprinkled with the sacred waters.

The air was thin so one had to adjust by moving slowly. The pace seemed to add a respectful tone to our visit. I was very altered due to the whole experience. I didn’t even notice the pigs who roamed around us. Later upon seeing my photos I was quite astonished to them there with us.

Taking the simple L-dowsing rods in hand I experienced the currents crossing strongly at the main point. As walked round the stone I held the rods out in front of myself. As I passed each side they turned inward quite forcefully, then relaxed out again until the next side.

After our exploration of the energy lines and sacred ruins on Sun Island we crossed to Island of the Moon to visit another ancient Inca spot. This was the nurturing place of the future Inca Queens. A place women were raised to be sacred partners to Kings. I wonder if it wasn’t the other way around though. That the King needed legitimacy from an the Sacred Female Shamans.

The air was sweet and the colours brilliant. The blue of this clean Bolivian sky so high up in the mountains was startling. Lake Titicaca is the highest navigable body of water on Earth.

We ate lunch atop the Moon Island. Great food and spectacular view. Ancient mountain terracing and a traditional reed boat sailing by were great visual feast as well.

At the end of the day the hydrofoil dropped us at the Eco Village and small museum spot. Here we met Jose Limachi, the man who helped Norwegian explorer and writer Thor Heyerdahl build his famous reed boat vessel Ra 2. Thor also is well known for his voyages with the Kontiki in 1947. He proved ancient people could use ocean currents and simple vessels to sail around the globe. Thor Heyerdahl boat Ra 2 replica.

This wonderful day with Lake Titicaca and her treasures ended with our bus ride to The Rtiz Hotel in La Paz. In another blog I will share my next adventure there and then at the ancient sites called Puma Punku and Tiahuanaco. Preview for my next blog from the mysterious ruins of Puma Punku: Ancient Aliens Star and World Explorer Extrordinare David Hatcher-Childress does a quick bumper with me TFHL 🙂