I was inspired to join this small group since traveling with a few of these hearty souls previously had proved enjoyable.

This time we visited Amman and the ancient cities of Petra and Aqaba in Jordan.

After getting shaken down for our drinking water by a security check, we flew out of Cairo to Amman Jordan. There we were met by our guide Abdullah and went straight to work seeing the sights. The Roman Amphitheatre and The Citadel. I will feature them in a future blog. The bus drove us to the southern Jordan to the town of Petra and we got into our hotel.

Petra was the reason we came and Petra we saw.

The visitor centre was right across from the hotel.

There you could see an area map and do a little shopping. 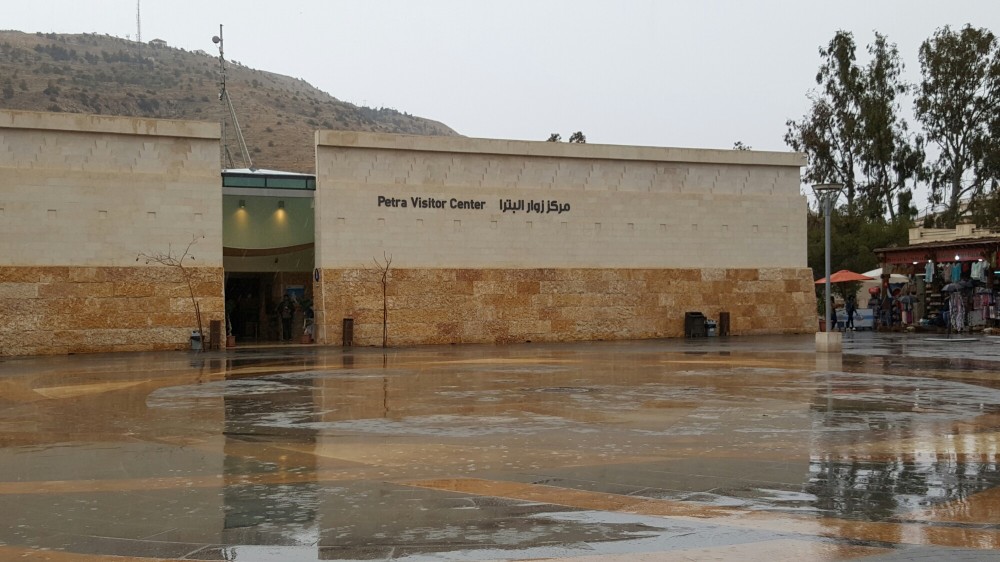 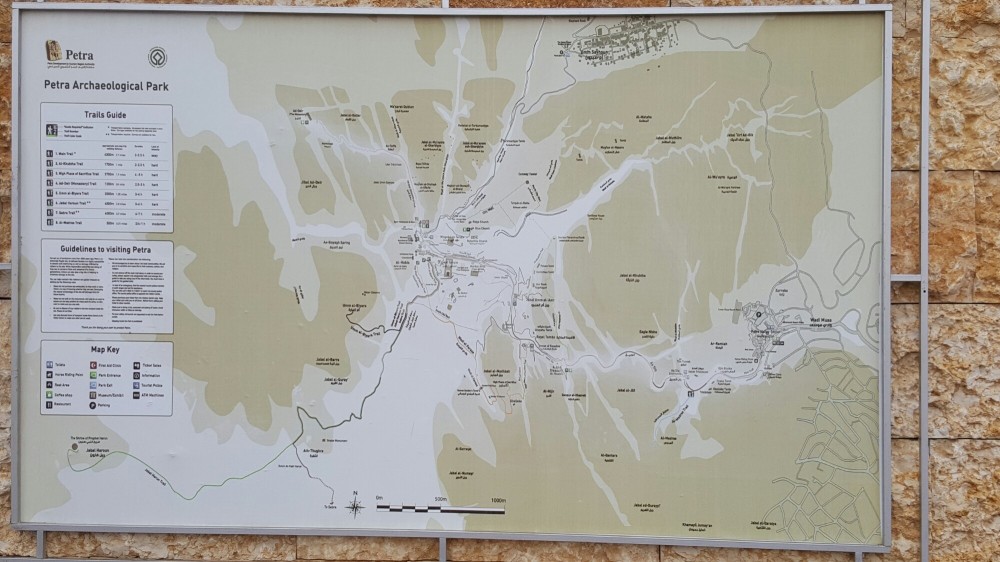 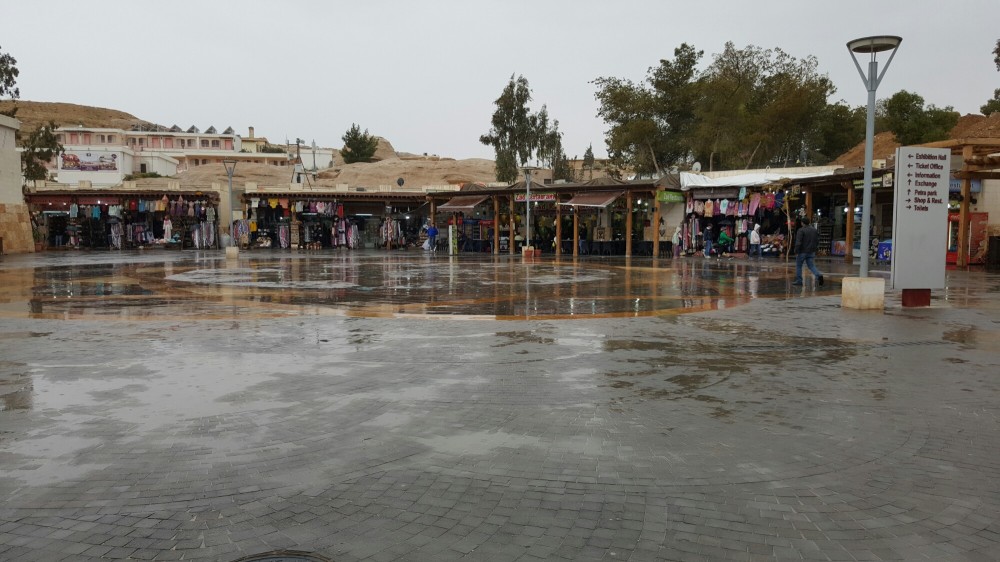 Patricia and I decided that we could do with out the walk and hired a horse and buggy. The driver looked trustworthy and we were assured we could stop and take photos in our own time. This we found out was a relative truth. Business is business even and especially in places like Ancient/ Modern Petra. 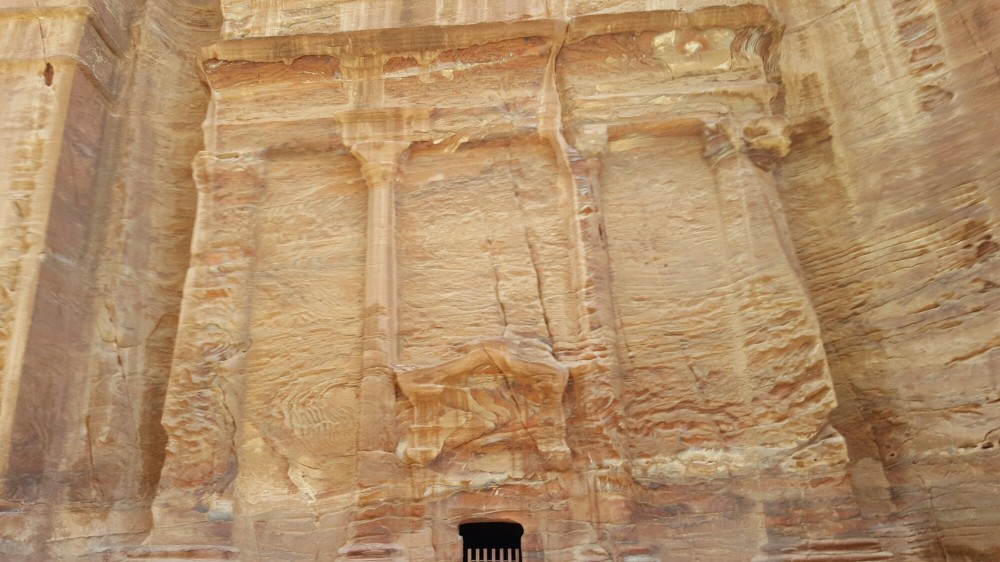 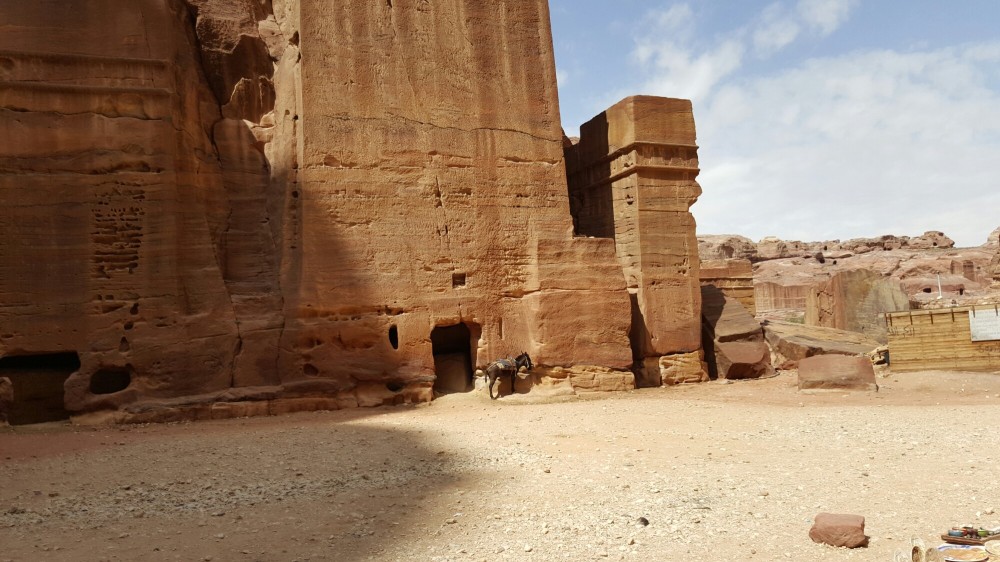 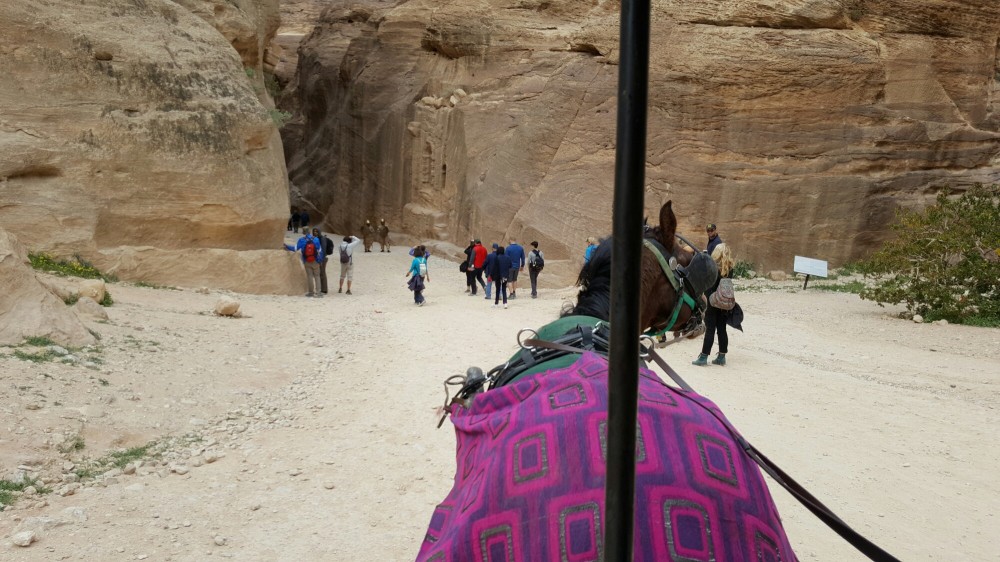 I was quite pleased the buggy had the enormous amount of padding it did as we sailed a’ clippity clopping through the famous SIQ. 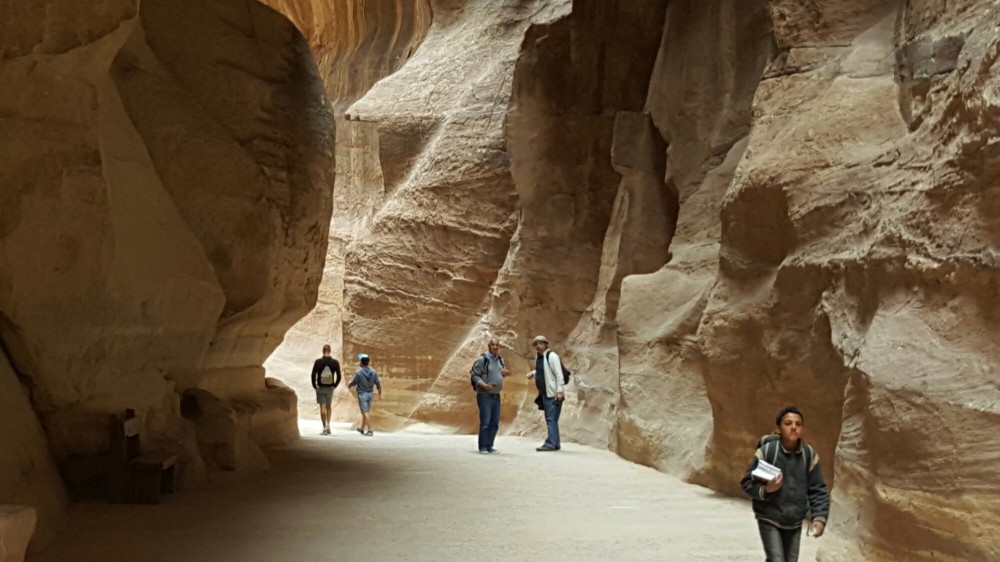 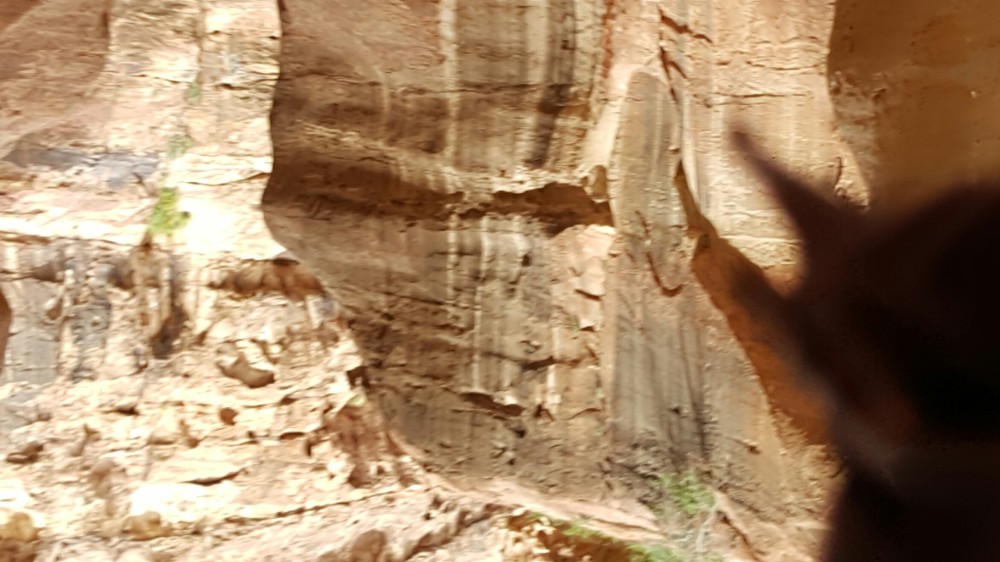 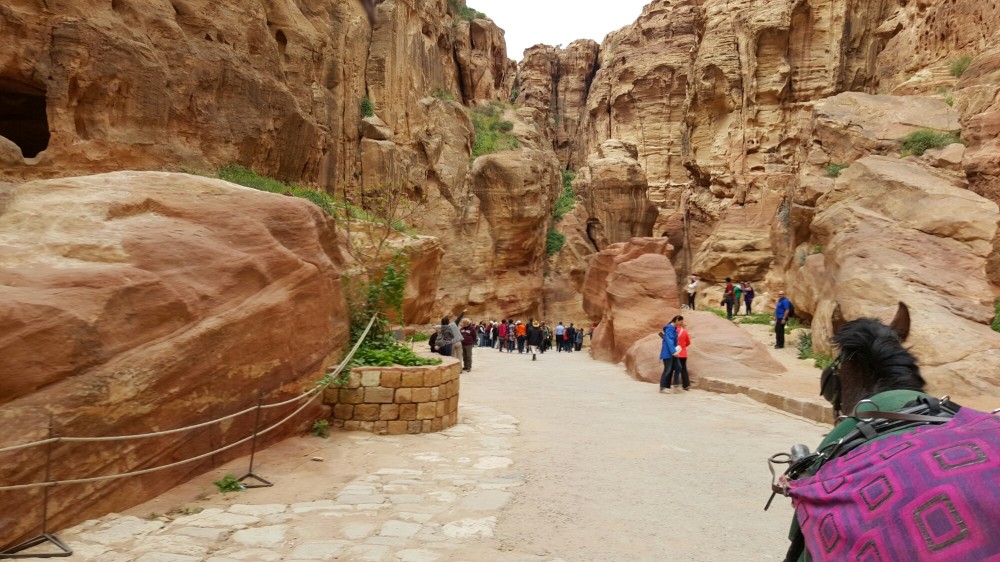 It was a bit hard to see upwards at the rock walls as the carriage had a sunshade. The other pedestrians peacefully perambulating along had but a few moments to move as we paraded by. 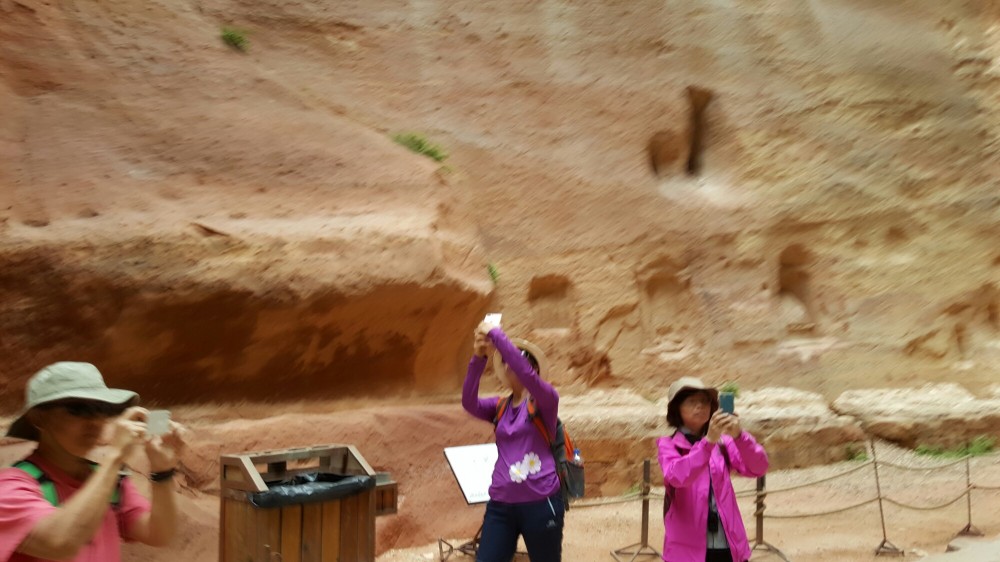 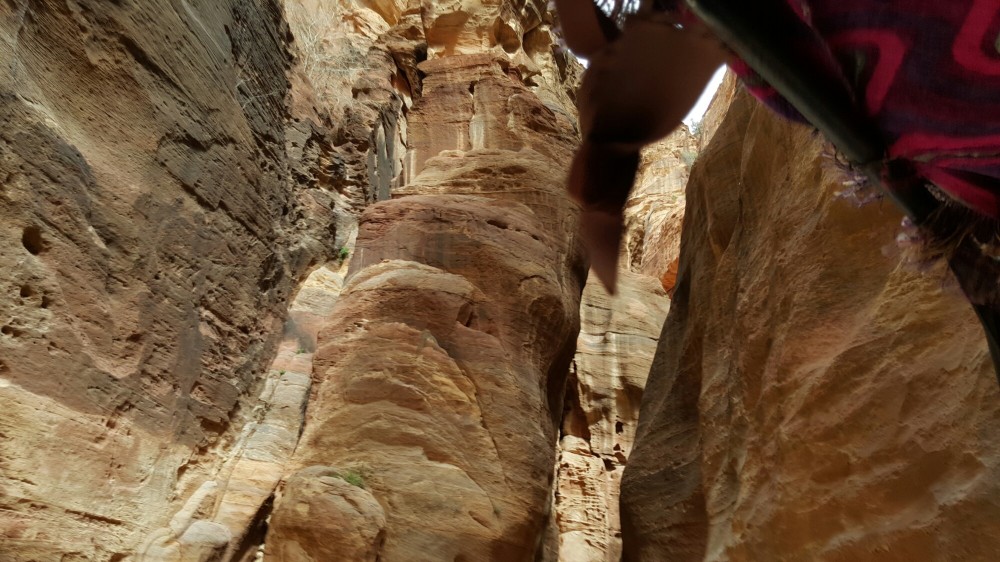 The road in certain portions became as huge cobbles, like Cornoation Street for giants. The driver would always verbally alarm ‘Chinese Massage, Chinese Massage’ ! Let me tell you it was, I guess. 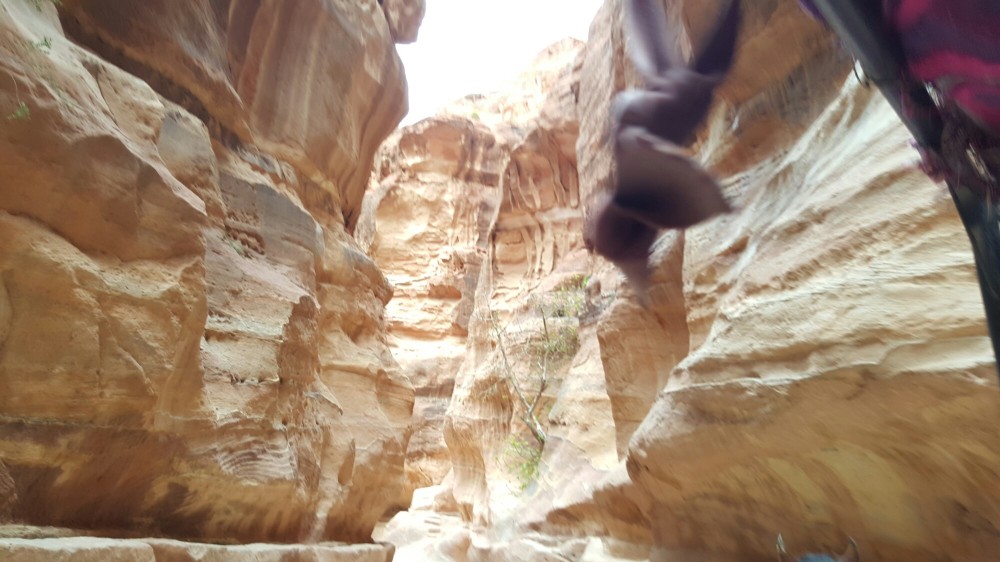 Once we whizzed past a set of feet that were all that was left of an ancient statue. I think. 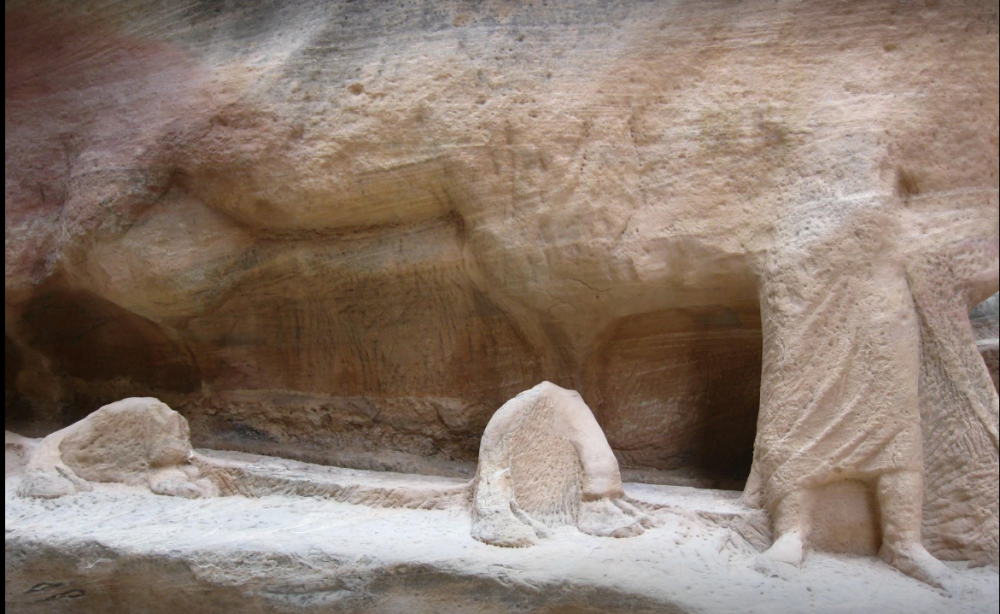 By this time we were both laughing. We were in the ZONE.

The place where tears, terror, and joy flow together like great adventure tourism should. 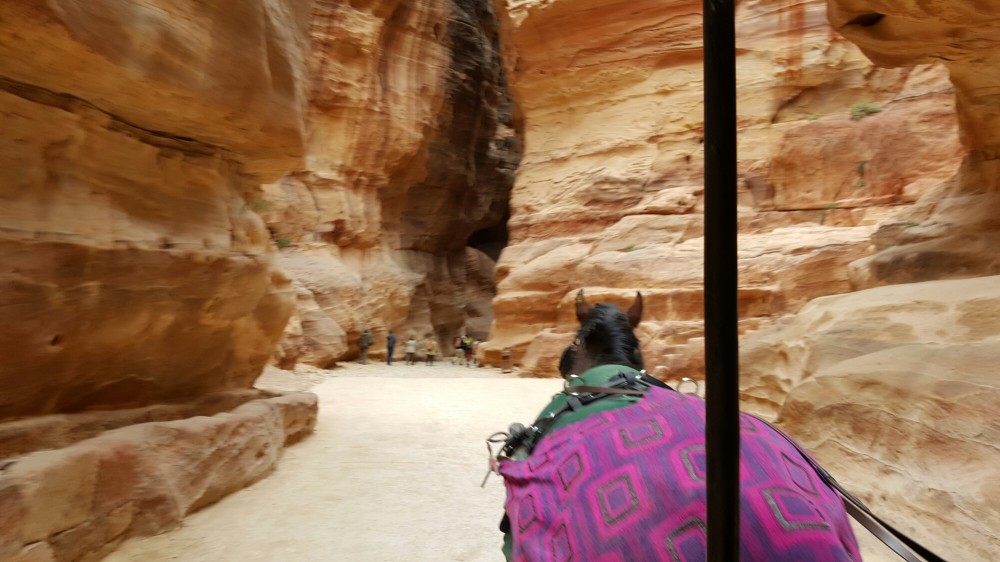 Once we arrived at the opening to the treasury, I stopped the driver to get the selfie I came for. Sorry for the wild eyes. The buggy ride was quite exhilarating. Regardless I could still imagine the countless others through history who were awed by this magnificent sight emerging through the crack. 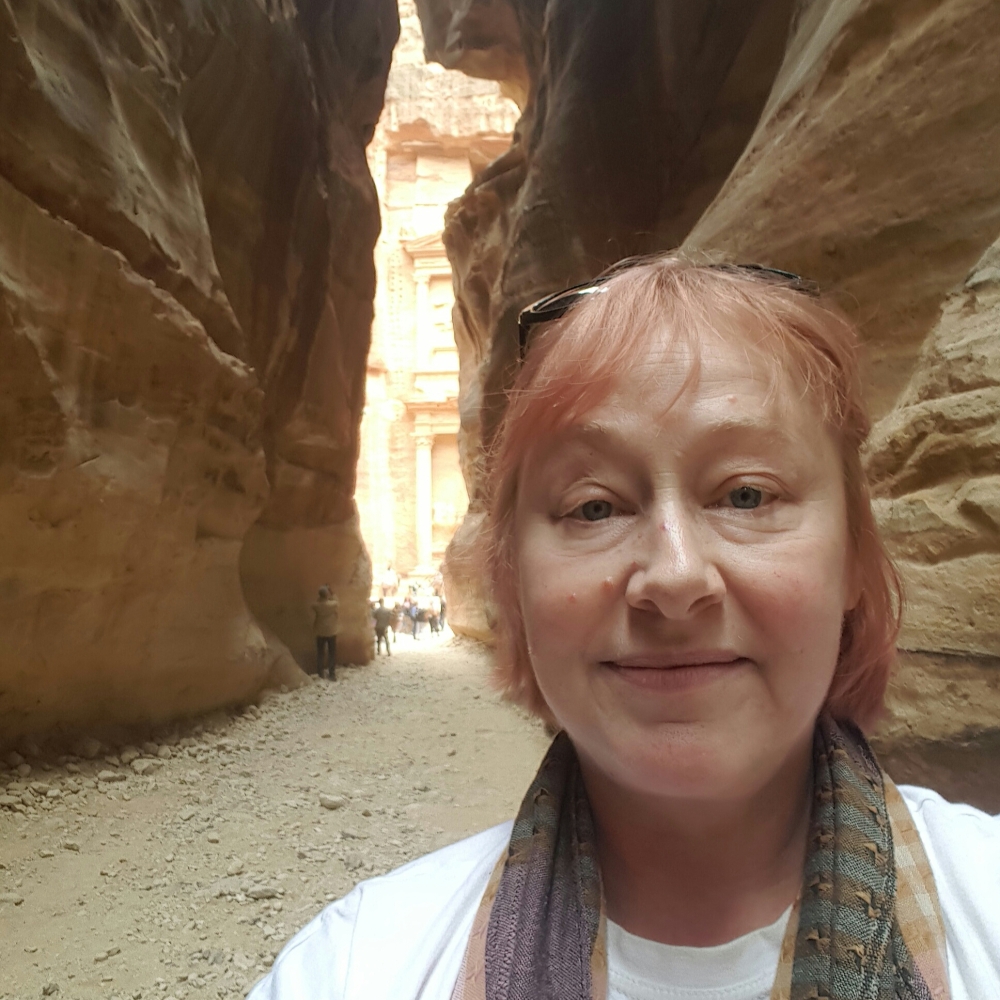 What we would behold next I was unprepared for. Men who who looked like Jack Sparrow trying to sell me all kinds of sparkly treasures. 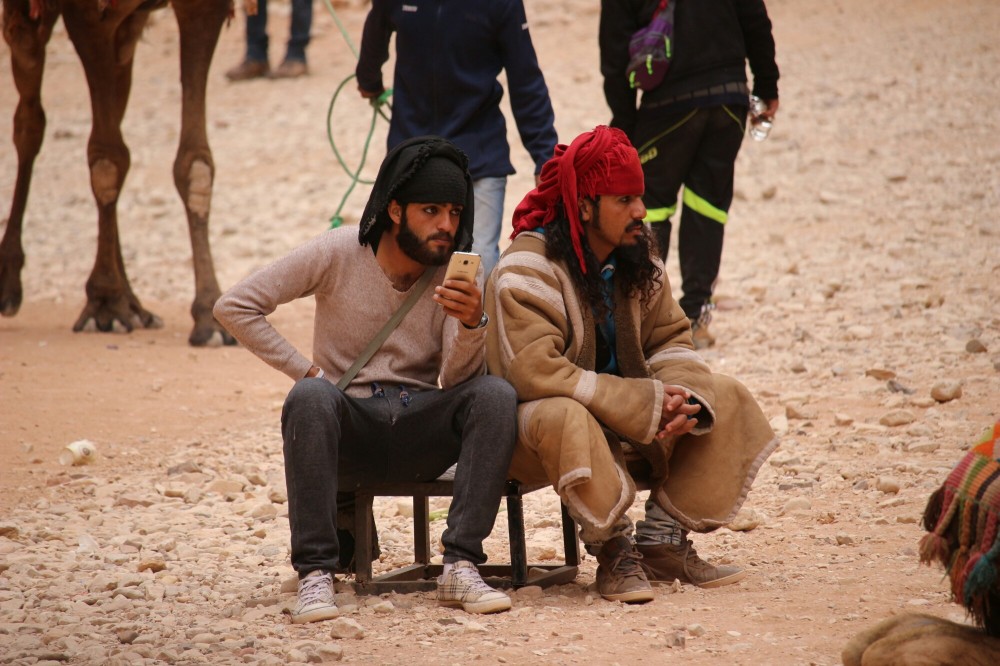 After the guide offered to take the keeper shots, he excused himself to run down further for another client to bring back.

This was great. It let us sit a while beholding the amazing Treasury. We ordered Pomegranate Juice and dissuaded the sellers. While catching up on each of our experiences so far.

The best part of the journey is the people you meet. The ones who just like you, are drawn to understand how humans fit, to explore certain aspects of the unknown in our Universe. The deep thinkers and those who long to know why. 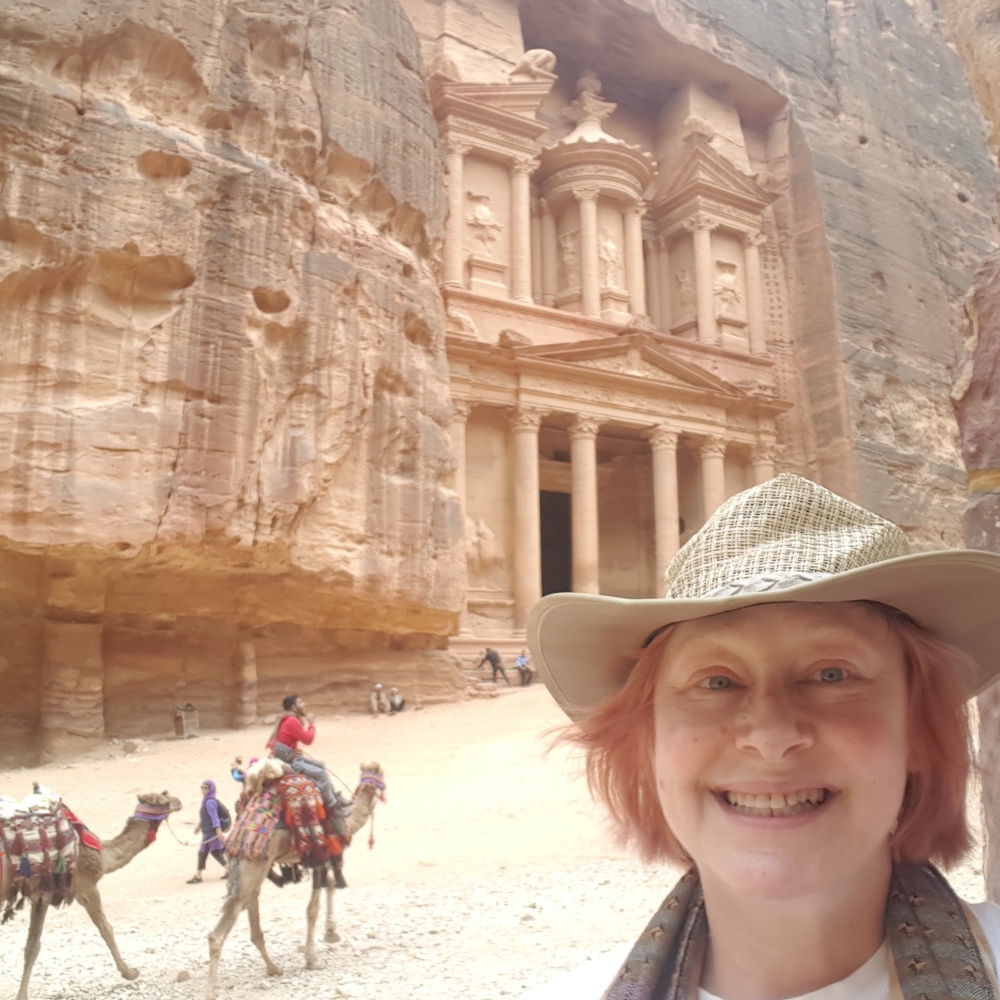 Once our driver got us down to the area past the Treasury we saw the Roman remains of a road. 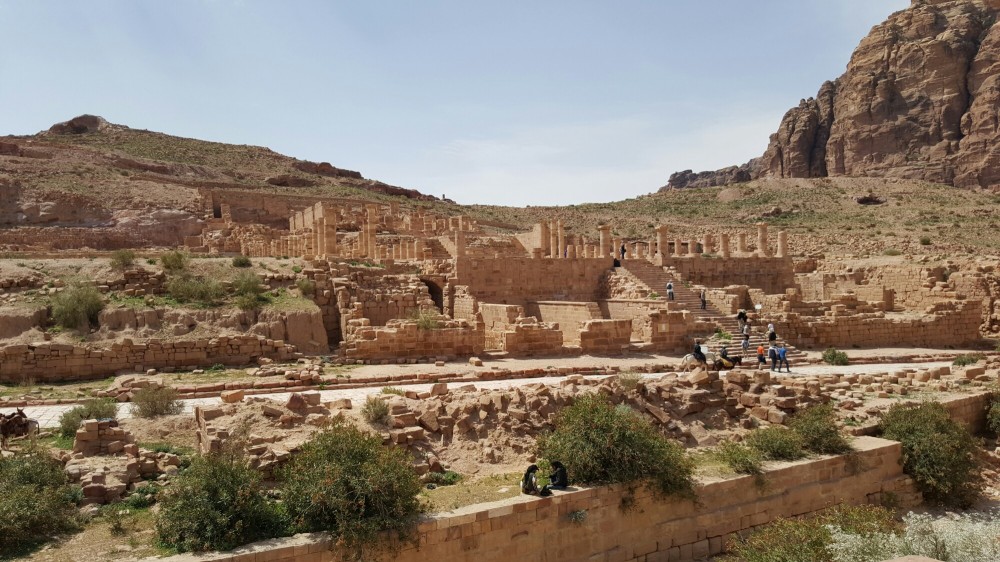 This ancient area has been lived in and re lived in over and over through time. Site transformation is key in looking at the landscape. Many of the caves are quite resonate for vocal sound as well.

The most amazing site was the amphitheatre. Now this was much older than the Romans. In fact the Amman Roman amphtithetare we had just seen was much newer looking. Romans would never have built this amphitheatre like this. It would have been much more ornate. 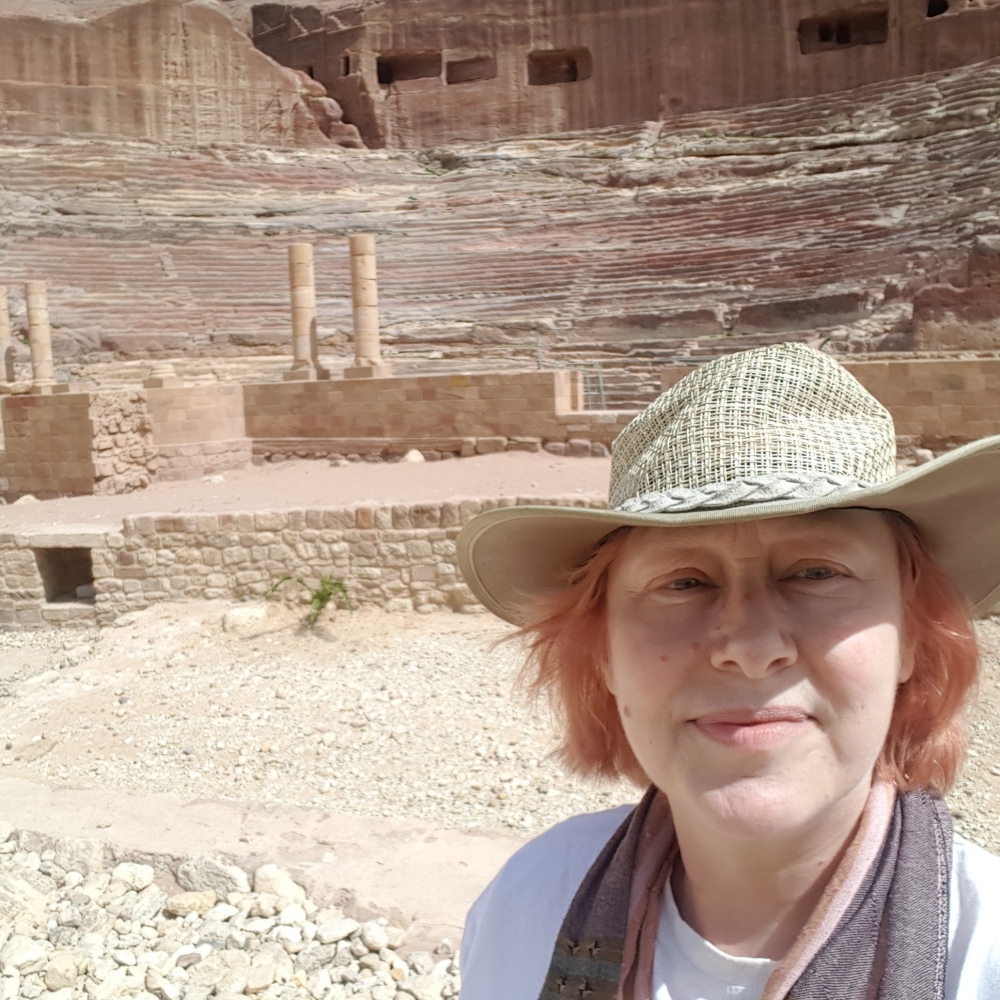 This is a 6000 person amphitheatre. Imagine the crowds in it’s time ! The traders en mass in the heyday of ancient commercial interaction.

A world dedicated to the needs of the transient businessmen. 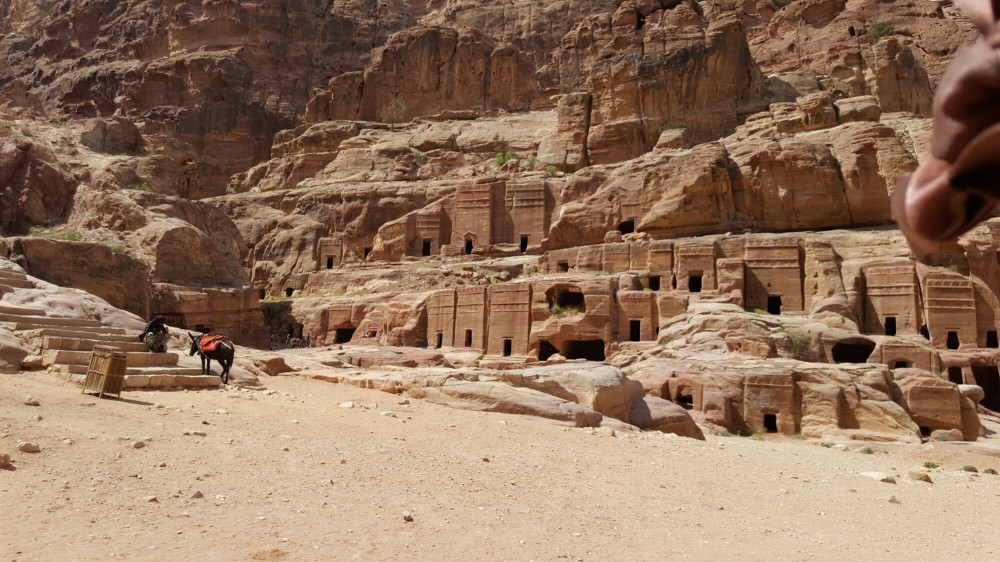 Previously was there another type of culture ?

One living more from a natural techno spiritual lineage? It’s fun to imagine.

The similar step pyramid designs from South America are here as well as Iran Turkey and Syria. Suggests to us an ancient global world in communication.

After being asked multiple times if we want to ride a donkey up to the Monastery we escape up to a small caved area overlooking the Roman construction at its roads end. We were assured we would grow old thinking about a trip up to the Monastery by donkey.

I can live with that.

Brien and Irene made it up there and that’s all that matters. 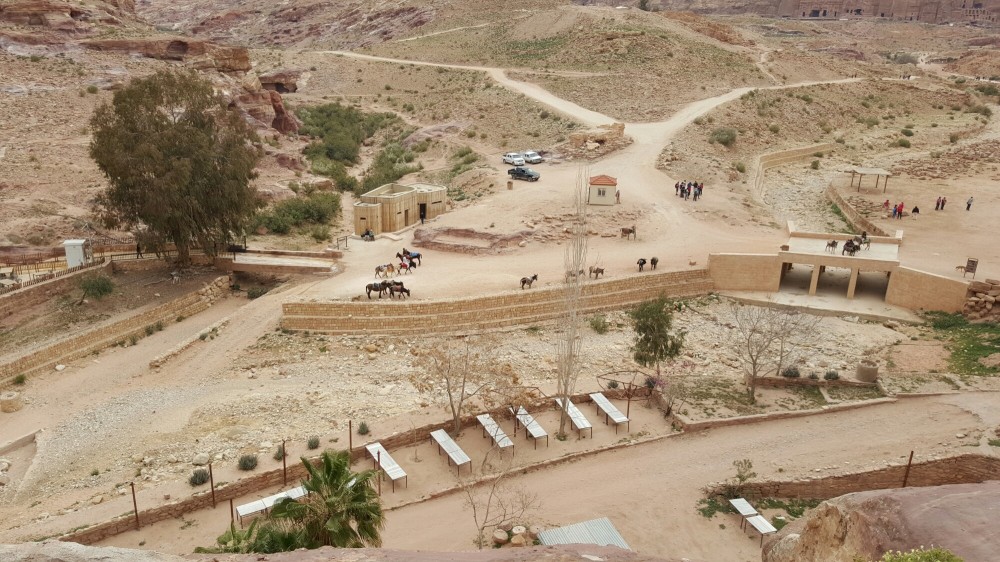 The rocks colours are pastel. One is enfolded in purple, pink, yellow and tan, red, black and white. Beautiful American south western reminiscent, but not quite. Petra is rounder, more feminine. 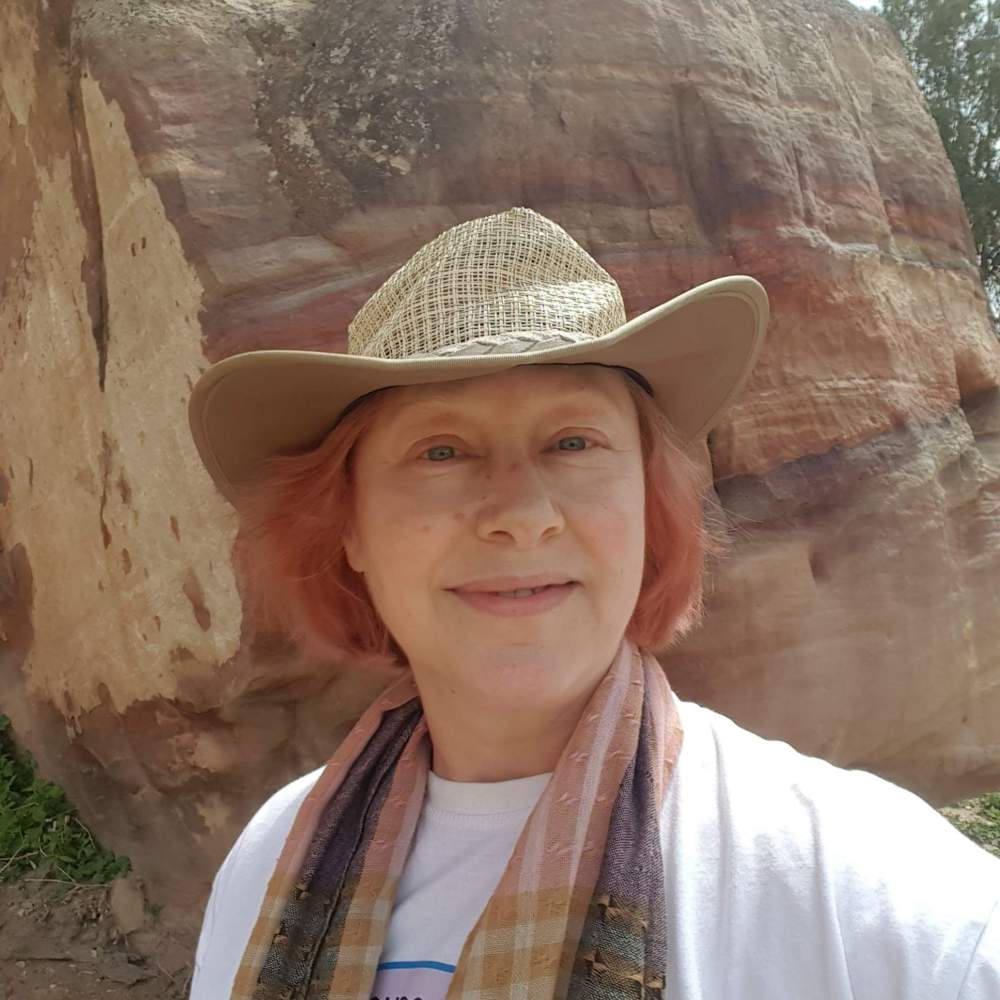 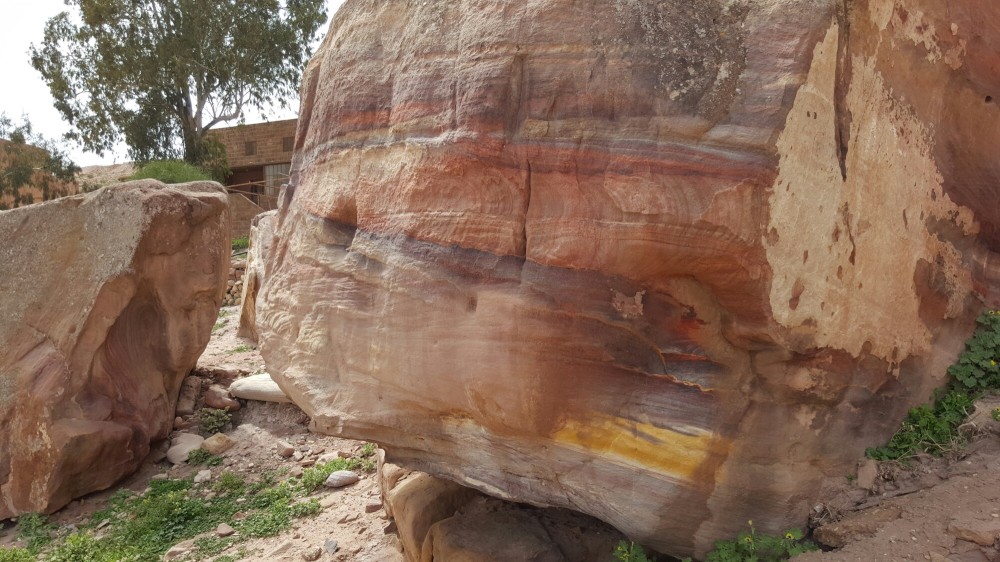 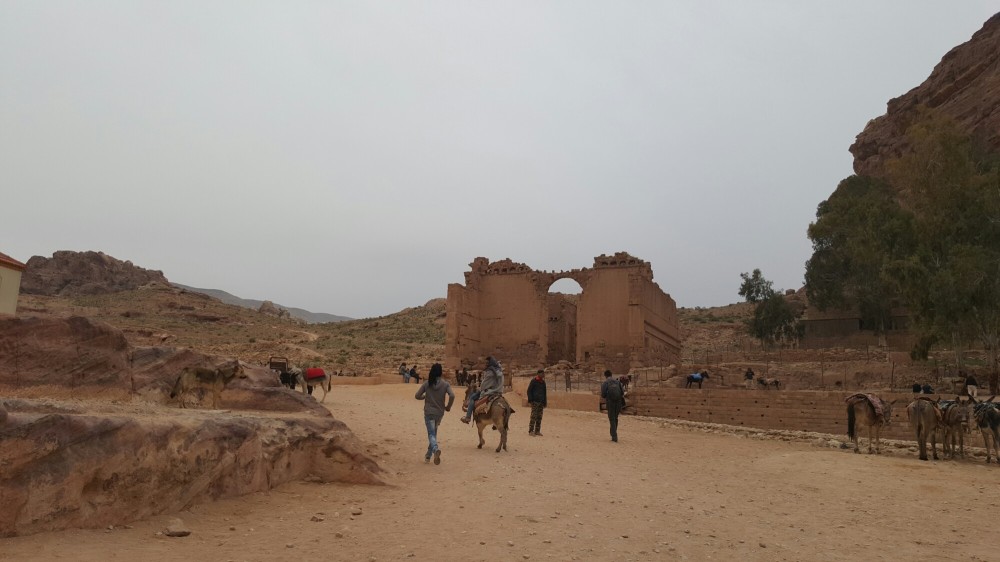 Roman Arch at Petra. It is quite amazing how those Romans marched around. And in little leather skirts too. Men. 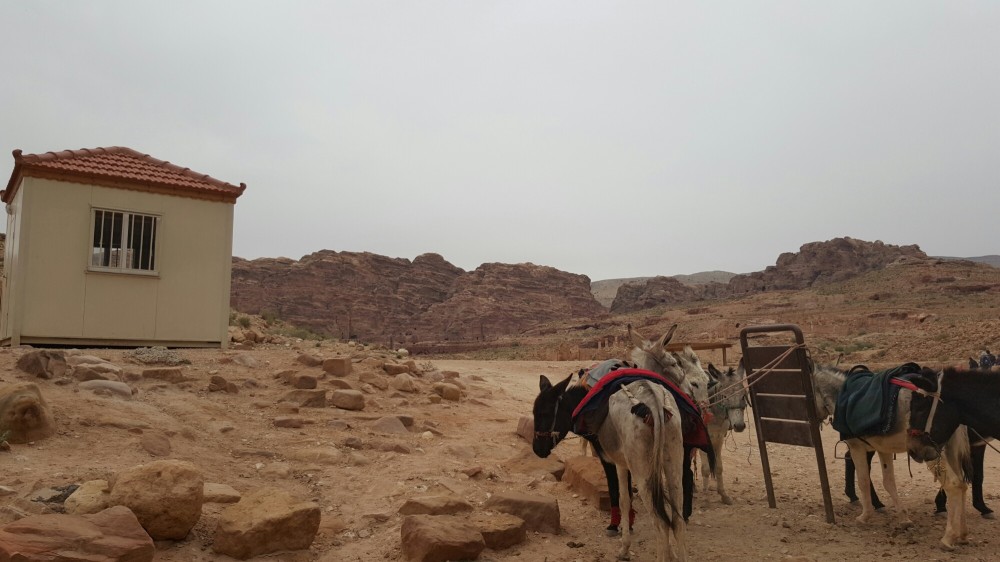 The ride out began as the rain started. The driver sped us back up our of this special site. Hanging on through the recurring ‘Chinese Massage’ and looming cliff edges, we manged to not run anyone down.

The rain began to created small channels now running freely down as we carried on upwards. I hadn’t noticed the angle as we entered but now the waters showed us. At one point the exhausted pony stalled for rest but our driver was not impressed. Eventually we made it back. I at this point was baptised in desert rain. Soaked to the bone in fact. What an amazing adventure. We felt truly blessed by Petra’s spirit.