Welcome to Amman Jordan. More specifically The Hashemite Kingdom. The Roman Amphitheatre was our first stop, after a drive through some of the streets of Amman Jordan.

Our sweet guide Abdullah had no idea the historically skeptical guests he would have his hands on for the next few days. I had joined an extension tour from Egypt into Jordan.

Amman‘s Roman Theatre is a 6,000-seat, 2nd-century Roman theatre. A famous landmark in the Jordanian capital, it dates back to the Roman period when the city was known as Philadelphia. The theatre and the nearby Odeon are flanking the new Hashemite Plaza from the south and the east respectively, while the Roman Nymphaeum is just a short stroll away in south-westerly direction. 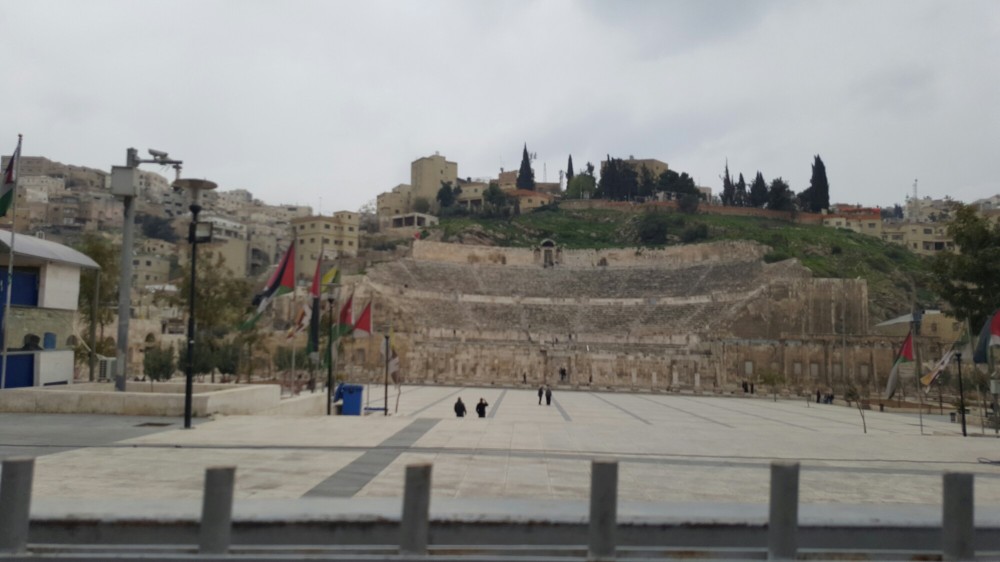 Along for the ride were  my travel pal Suzan Moore, geologist, David Champeau, Emily and Adam Young, John and myself, The Tinfoil Hat Lady.

Patricia Leahman-Awyan Brien Foerster and Irene M Flores were a big draw for me personally, as I adore their work and had travel history with them.

For me part of the fun is capture others being in the space. How we each like to interact and introduce ourselves. Time is always short and the many new things vying for one’s attention are always exciting. Imagining the Romans being here. How old this huge city is. Set in to 7 Hills just like Rome.

The front area of the Amphitheatre is a main street or through far that was the main drag so to speak. 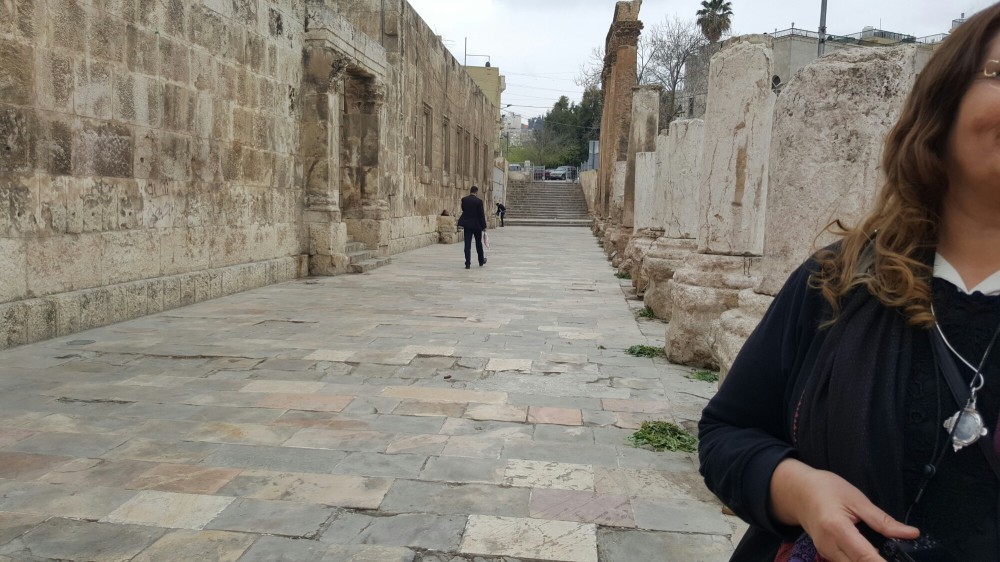 Only a few columns were standing. They seem to have been reconstructed somewhat. How exciting to approach this plaza in a crowd from ancient times. This main drag area would be for the more elite.

As I had been looking at this spot on my desktop at work in anticipation of my trip, it was surreal to be standing here. Sharing this with others who also had never been here was a privilege.

It was fun to create sounds and explore the resonance a bit.  The centre for sound was just off centre.

Patricia and I enjoyed the funnel of energy this small geometrical cone created. Those Romans. This place was impressive. Very steep. If you fell you would crack your head open.  Also build facing East so the sun would set behind the crowd.

Now about these little Round Nooks at the back of the stage….we were told it was a bit naughty. Bro means in front of.  The statues were there and the women were in front. See video above where I say Bro-thel !!! 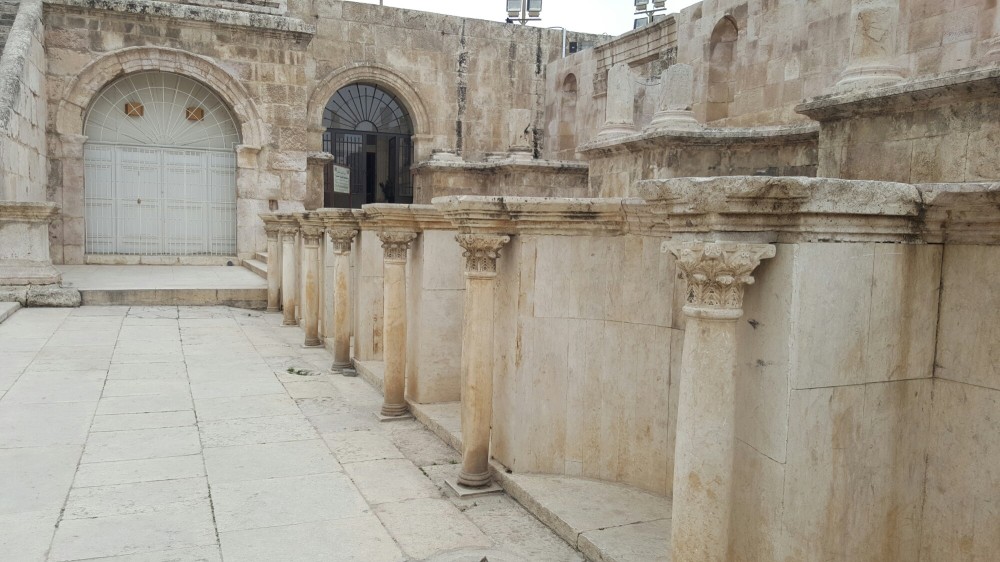 Apparently these areas housed statues under which ladies for sale for sex would be on display! I think I heard him say here is where prostitution started but I could be wrong 🙂

From the Amphitheatre you can see up to the high place or the Citadel. 7000 years of habitation. Imagine what it has seen. 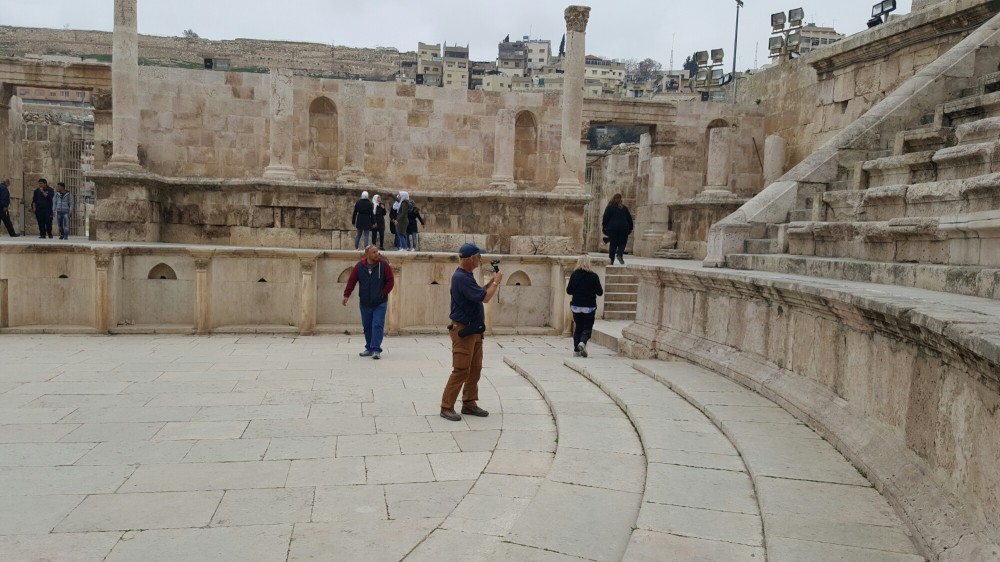 Of course there was a special box constructed with two special chairs either end. I caught Brien trying one on for size. Consider joining Brien and Irene on a tour of Peru or Bolivia. Especially if you like elongated skulls 🙂

This beauty of a column looks to be all one piece !

The spiral and the baby cherub legs. I seem to see a lot of that on this journey. Patricia loves to study the opposite spins. I will not attempt to explain her ideas here, but suffice to say I am excited to hear more from her past and future research. 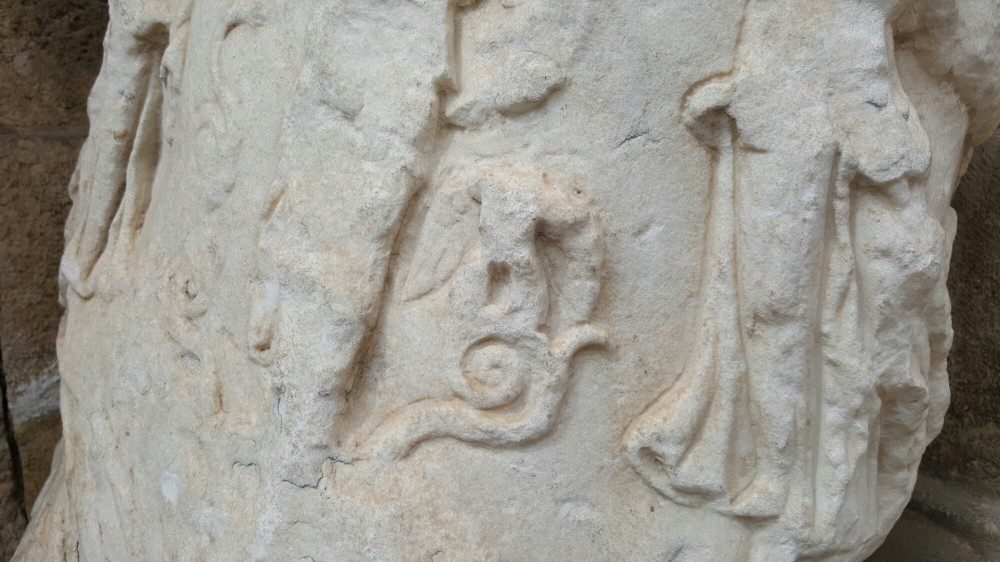 The small museum was very interesting. No photos allowed. It had great example of original ancient mosaic floors and tiles.

Also joules and knives. I also got my introduction to the evil eye and the Hamsa, the hand symbol. To ward off anyone projecting anything negative at you. Being jealous or coveting. This psychic attack is seen as real here. We know it is. Be wise, use the hand. I found one when we were shopping in Aqaba. You know, just in case.

The best part for me were the garments worn by the tribes. One could tell what tribe you were from by your outfit. They had one for Bethlehem. Pastel Blue and Pink just like you think 🙂

All in all a great visit. Now we go to the highest point and look down onto the Amphitheatre. The Citadel. The original Philadelphia.

One last shot of the pillars.

Next up to the Ancient Citadel.  Come on Let’s Go !